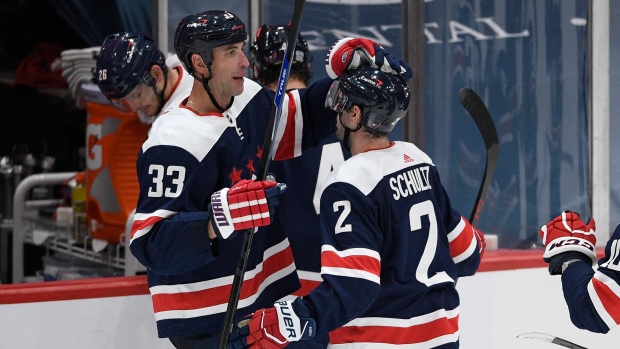 WASHINGTON — After killing off a five-minute penalty in the third period against an opponent that had gone to overtime the last four games, the New York Islanders thought they'd also get there against the Washington Capitals and pick up at least a point.

But then Justin Schultz scored with 26.4 seconds left to give the Capitals an emotional 3-2 victory Tuesday night after losing two more key players to injury. Finishing the game without centres Nicklas Backstrom and Lars Eller and missing five other prominent players, Washington matched a franchise best with points in the first seven games of the season.

All this without captain Alex Ovechkin, centre Evgeny Kuznetsov, defenceman Dmitry Orlov and goaltender Ilya Samsonov because of COVID-19 protocols, and winger Tom Wilson because of a lower-body injury.

"I warned our group about the play of the Caps, the galvanizing in terms of rallying around the guys that are out," said Islanders coach Barry Trotz, who won the Stanley Cup with the Capitals in 2018. “You got maybe the greatest goal scorer of all-time up in the stands, they had some (absences) with Kuznetsov who’s a dynamic player, Backstrom got hit and missed some time, Eller missed some time it looked like at the end. They were working. They were coming.”

Schultz's goal avoided what would have been a franchise-first fifth overtime game, which could have been especially costly missing Eller and Backstrom. Eller was injured on a hit from behind by New York's Leo Komarov in the third, Backstrom was on and off the bench with an undisclosed ailment and coach Peter Laviolette didn't have an update on how either was doing.

What he did have was a sense of relief from ending this before overtime.

“The regulation wins keep teams in your division from getting points,” Laviolette said. “I know that guys were really excited because it was less than a minute to go, you probably think you’re headed to overtime, in most situations you probably are heading to overtime, and to score a goal like that late in the game, it just brings energy right to the bench.”

And sucks the life out of an opponent. Coming off a shutout loss to New Jersey, the Islanders thought they'd built enough momentum from killing off Komarov's five-minute major penalty for boarding and were stunned by the result.

“A minute, two minutes (left), as much as we’re trying to win the game, we’re trying to get into overtime because every point’s big,” said Mathew Barzal, who scored along with Noah Dobson. “So just the way it happened, it was pretty heartbreaking.”

Capitals defenceman John Carlson had a power-play goal playing in Ovechkin's spot, and Daniel Sprong scored his first with Washington. Schultz got the primary assist on Carlson's goal, and Vitek Vanecek was solid again with 32 saves in a fourth consecutive start in Samsonov's absence.

“We didn’t make it difficult (on Vanecek), but I give them credit: They blocked a lot of shots,” Trotz said. “They were committed, too. It’s hard to get pucks through right now. You look at the guys in front trying to block shots from both sides. This is playoff mentality right now and I’m not quite sure we’re in a playoff mentality right now, which is really (ticking) me off.”

The Islanders put winger Anthony Beauvillier on injured reserve retroactive to Sunday. He left that night with a lower-body injury and will miss at least the next three games.

Islanders-Capitals was juicier on the coaching front when it was Trotz against former assistant and replacement Todd Reirden. Since Reirden was fired and replaced by Laviolette, the only possible conflict would stem from Trotz being unhappy about how Washington's new coach kept his top power-play unit on the ice late in an 8-3 blowout of New York in December 2019 while with Nashville.

Nope. Trotz insists there are no hard feelings.

“This is part of the game that you go through,” he said. "I’d see Lavy down the hallway if they practiced here. It’d be fine. There’s no carryover.”

These teams face off again Thursday in their second of eight meetings this season.