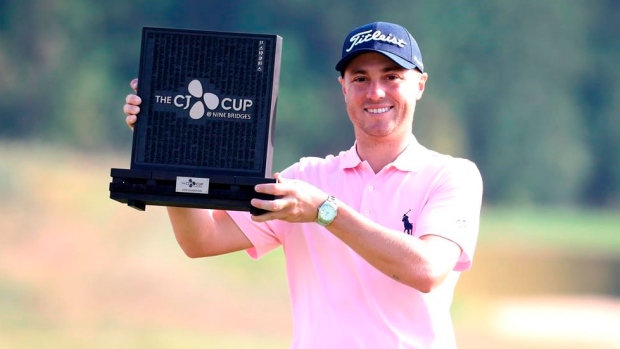 JEJU ISLAND, Korea, Republic Of — Justin Thomas pulled away from Danny Lee in the final hour and closed with a 5-under 67 on Sunday to win the CJ Cup at Nine Bridges for the second time in two years.

Thomas won for the 11th time on the PGA Tour and the second time in his last four starts.

He was one shot ahead when Lee, the South Korea-born player who plays under the New Zealand flag, bogeyed the 15th and 16th holes to fall three shots behind.

They were the only two players who had a serious chance of winning. Lee closed with a 69 for his best finish in nearly a year.

SHANGHAI (AP) — Danielle Kang played bogey-free and closed with a 2-under 70 to win the Buick LPGA Shanghai for the second consecutive year. She had a tournament record 16-under 272.

The 27-year-old American began the day one stroke behind compatriot Jessica Korda, who shot 72 to finish one shot behind.

Kang birdied the 15th to pull two strokes ahead, but Korda responded with a birdie of her own on 17. Kang then holed a 3-foot par putt on the 18th to win her third career title.

Liu Yu of China shot a 65 to surge into a three-way tie for third with Japan's Nasa Hataoka and LPGA rookie Kristen Gillman. It was the best finish of Gillman's career.

SAINT-QUENTIN-EN-YVELINES, France (AP) — Nicolas Colsaerts of Belgium ended more than seven years without a victory, shooting a 1-over 72 and surviving a wild back nine at Le Golf National in the French Open.

It was Colsaerts first victory since the Volvo World Match Play in 2012, when he was No. 32 in the world and played a role in Europe's record comeback to win the Ryder Cup at Medinah.

This one wasn't easy, even after he stretched his lead to five shots early in the final round.

Colsaerts closed with three pars for a one-shot victory over Hansen, who closed with a 68. George Coetzee, who led by two shots with six holes to play, made triple bogey on the 15th hole and shot 71 to finish two shots behind.

RICHMOND, Va. (AP) — The final round of the Dominion Energy Charity Classic was postponed until Monday because of more than 2 inches of rain overnight and a forecast for more.

Tommy Tolles and Scott Parel shared the lead. Colin Montgomerie was one shot behind.