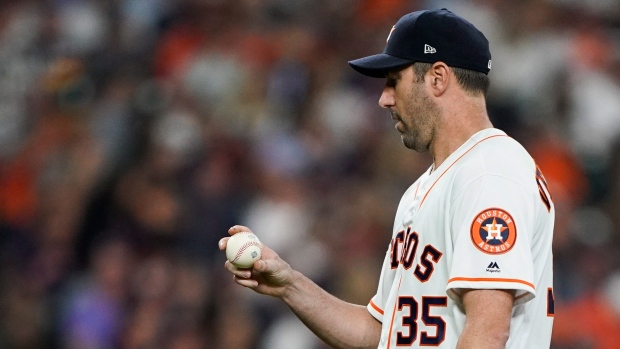 WEST PALM BEACH, Fla. — Justin Verlander's spring training debut will be postponed at least a few more days while the Houston Astros ace deals with tightness in his groin.

Verlander had been scheduled to start Thursday against Washington. Instead, he will throw a simulated game at the Astros' complex prior to that exhibition.

“He said he's doing good, so we'll just have to keep an eye on him and analyze him,” Baker said.

Baker added that he isn't worried about the injury lingering and expects that, if all goes as planned on Thursday, Verlander would make his next scheduled start, likely early next week.

“I would think so,” Baker said. “It just depends on how he feels.”

Verlander won his second Cy Young Award last season by going 21-6 with a 2.52 ERA. His 225 career wins are the most among active players.

The change of plans thwarts what would have been a marquee Grapefruit League pitching matchup.

Washington is still planning to send Max Scherzer to the mound on Thursday. Scherzer tossed two scoreless innings at Houston in the Grapefruit League opener for both teams.

Right-hander Christian Javier is now expected to get Thursday's start for Houston against Scherzer.