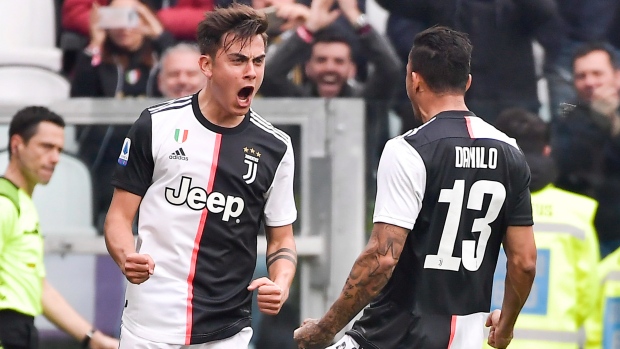 MILAN — Lazio's hopes of winning a first Serie A trophy in 20 years are very much alive after it came from behind to beat title rival Inter Milan 2-1 on Sunday.

Ashley Young scored his first goal for Inter since joining from Manchester United last month but Ciro Immobile levelled with a penalty early in the second half.

Sergej Milinkovic-Savic scored the winner in the 69th minute.

“This win wasn’t only down to me, we are a family and you can see that on the pitch,” Milinkovic-Savic said. “I hope to remain on this path.

“We talked in the dressing room saying that this was our match. The title isn’t a must, but we’ll fight for it. We are there, we’re not giving up anything.”

“Now we have to remain humble and focused, seeing as ahead of us there are so many matches full of pitfalls,” Lazio coach Simone Inzaghi said. “We are going at a crazy rhythm, along with Juventus and Inter. In other leagues we would be top with a large advantage.”

Lazio won the last of its two Serie A titles in 2000 but was unbeaten for a club record 18 rounds heading into the match, with its last defeat coming at Inter in September.

The hosts almost got off to the perfect start with a dipping 30-yard effort from Milinkovic-Savic which rattled the crossbar.

But Inter took the lead a minute from halftime. Lazio goalkeeper Thomas Strakosha could only parry Antonio Candreva’s effort and it came out to Young, who volleyed in the rebound.

The turning point came when former Lazio defender Stefan de Vrij bundled over Immobile to concede a penalty which the league’s top goalscorer coolly slotted into the bottom left corner for his 26th goal of the season.

And the turnaround was completed 20 minutes later. Inter defender Marcelo Brozovic did well to block Adam Marušic’s shot on the line but the ball came out to Milinkovic-Savic, who fired into the bottom left corner.

Lautaro Martínez had a goal for Inter ruled out for offside 12 minutes from time.

Paulo Dybala and Juan Cuadrado scored to help Juventus to a routine win over relegation-threatened Brescia.

There was more good news for Juventus as Giorgio Chiellini returned six months after tearing his cruciate ligament. The 35-year-old defender came on 12 minutes from time to huge cheers at the Allianz Stadium.

Juventus rested star forward Cristiano Ronaldo but Brescia’s day still got off to a poor start. It was already without first-choice goalkeeper Jesse Joronen through injury and his replacement Enrico Alfonso had to come off in the ninth minute after an accidental knee to the head from Gonzalo Higuain.

Joronen was replaced by Lorenzo Andrenacci, who was making his Serie A debut. Andrenacci had made just seven appearances in nearly three seasons at Brescia — all in the second division.

It got worse for the visitors in the 37th when Brescia forward Florian Ayé was sent off following two bookings in quick succession.

Dybala curled the resulting free kick into the left side of the net from just outside the area.

Juventus took until the 75th to double its lead when Cuadrado played a delightful one-two with Blaise Matuidi before firing into the bottom left corner.

Matuidi had only just replaced Miralem Pjanic, who limped off with an apparent muscular injury eight minutes after being introduced as a substitute.

Higuain had a late header disallowed for offside, while Rodrigo Bentancur and Dybala hit the woodwork late on.

Sampdoria is just a point above the drop zone after being routed 5-1 at home to Fiorentina.

Federico Chiesa scored twice, including a penalty, and both teams had a player sent off in the first half.

Parma won 1-0 at Sassuolo to move up to seventh, level on points with Hellas Verona, which drew 0-0 at Udinese.

Napoli won 1-0 at Cagliari to move up to eighth.