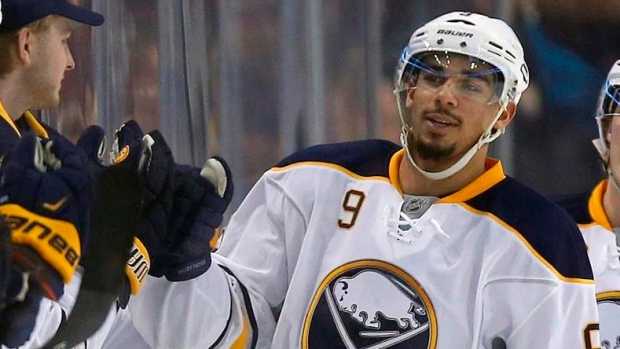 BUFFALO, N.Y. — Saying his recent off-ice legal problems "come with the territory" of being a professional athlete, Sabres forward Evander Kane acknowledged Thursday that he needs to be more careful when putting himself in potentially troublesome situations.

"These things unfortunately happen more often than not, and they're becoming more and more prevalent each and every day if you look around other sports," Kane said. "For me, it's trying to stay out of that kind of stuff and kind of picking my spots better."

Kane spoke during an eight-plus-minute interview session with reporters after joining Sabres teammates in reporting for the start of training camp. The comments were the first he's made publicly following a tumultuous off-season.

He was arrested in July, a month after allegedly grabbing three women by the hair and neck in separate instances during an altercation at a downtown Buffalo bar. Kane, who was forcibly removed from the bar by security staff, has pleaded not guilty to four counts of noncriminal harassment, one count of disorderly conduct and one count of misdemeanour trespass.

The 25-year-old is also being sued by a 21-year-old woman claiming he seriously injured her during an attack in his hotel room in December.

Last week, Kane filed a counterclaim against the woman saying her suit is meant solely to harass him and calling her allegations "a sham." The woman filed the lawsuit four months after prosecutors declined to charge Kane with any crimes following an investigation into a possible sexual assault.

"They happen to athletes or people in a position such as myself. And those are things you just have to deal with," Kane said. "But in saying that, you have to be a little bit more aware and kind of put yourself on a higher pedestal than maybe you think you are."

Kane said he has not been distracted by the legal issues.

"I've been focused on hockey all summer," he said. "I really haven't put too much thought or emphasis on the other stuff."

Sabres captain Brian Gionta said Kane must do better because he represents the team.

"I would hope that he wants to stay a little more low profile around things," Gionta said. "Hopefully, he's still maturing as an individual off the ice."

Kane said he is maturing.

"Well, I turned 25 on Aug. 2. I'm getting older," he said. "I'm maturing just as everybody else is. And I think every year and every day you mature as a person."

Kane said he's not had any conversations with Sabres management or heard from the NHL about his legal issues.

Following his arrest, the league issued a statement saying it will monitor the legal proceedings before determining whether Kane will face disciplinary action. The NHL added that, if necessary, it could direct Kane to the NHL/NHL Players' Association's behavioural health professionals for evaluation and counselling.

In early July, Sabres general manager Tim Murray said Kane needs to behave better regardless of whether he's cleared of the allegations.

Kane also ran into trouble with the Sabres, who suspended him for one game in February after he slept in and missed practice. It happened a day after pictures surfaced on social media of Kane celebrating in Toronto after attending the NBA All-Star Game.

The fourth player selected in the 2009 draft, Kane completed his first season in Buffalo after being acquired in a multiplayer trade with Winnipeg in February 2015. He scored 20 goals and had 15 assists in 65 games last season.

NOTES: Kane said he is fully healed from an injury to his left hand that forced him to miss the final nine games of last season. ... The Sabres' first on-ice practices are Friday. ... Buffalo opens the preseason by playing the Minnesota Wild at Penn State.