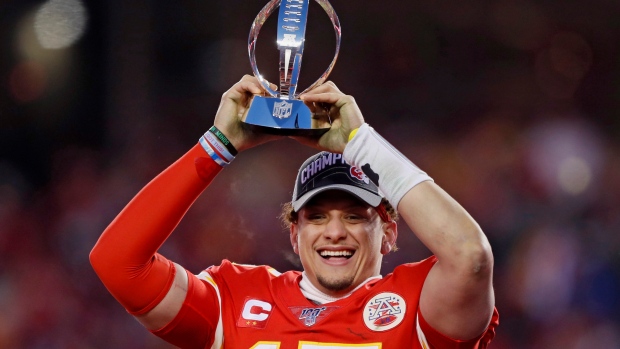 They let Patrick Mahomes and their potent offence wing the ball all over the field, never worrying for a moment that they were being too cavalier. They stuffed the line of scrimmage to take away Tennessee running back Derrick Henry, then did just enough in pass defence to ensure the Titans' Ryan Tannehill didn't beat them through the air.

The Chiefs certainly had their share of success in their 35-24 victory on Sunday.

Mahomes was 23 of 35 for 294 yards and three touchdowns while running for 53 yards and another score — a memorable 27-yard run in which he cut at the sideline, chugged up field and bowled over a trio of tacklers at the goal line.

The Chiefs were 6 of 10 on third down, allowing them to control the ball and keep it out of the hands of Titans running back Derrick Henry. In fact, they matched Tennessee in time of possession, a big win given their propensity for quick scores.

On defence, the Chiefs took the Titans out of their run-run-run game plan. Henry managed just 7 yards after halftime, and he never once carried the ball in the fourth quarter because of Kansas City's big lead.

“Something we have been preaching though is chasing perfection and improvement,” Chief safety Daniel Sorensen said "You see that show up and resonate as the season has gone on, and now we’re going to strive to get better as we go into these next two weeks. That’s our focus.”

The offence is humming and the defence has been playing as well as any in the NFL since Week 10. In other words, just about everything is working, whether it's the passing game with Tyreek Hill and Sammy Watkins or the running game with Damien Williams or the defence, led by newcomers this season in Tyrann Mathieu and Frank Clark.

Special teams have hardly been special in the playoffs. The Chiefs had a punt blocked and fumbled a punt return in the divisional round, and they allowed Titans punter Brett Kern to throw a pass to Amani Hooker for an easy conversion on a fake punt Sunday. It was particularly embarrassing given it was 35-17 in the fourth quarter and just about everyone in Arrowhead Stadium was looking for the fake — except the 11 guys on the field wearing red.

Clark brashly talked about shutting down Henry all week, providing the Titans plenty of bulletin board material. But he came through with aplomb. Clark helped hold Henry to 69 yards rushing while providing plenty of pressure on Tannehill, even sacking him late in the game to put an exclamation point on the win.

Dave Toub, the Chiefs' special teams co-ordinator, has been among the best in the business for years, and as recently as last off-season got some interest for head coaching jobs. But his units have struggled throughout the post-season, and a mistake in the third phase of the game in the Super Bowl could be the difference against the 49ers.

Nobody for a change. The Chiefs have weathered plenty of injuries this season, including injuries to Mahomes, Clark and Tyreek Hill, but everyone should be ready to go in Miami. That includes defensive tackle Chris Jones, who played through a calf injury against the Titans but came out of the game feeling good.

50 — Is there another more incredible number than the five decades since the Chiefs were last in the Super Bowl?

Chiefs coach Andy Reid spent Monday morning breaking down film of San Francisco, and the team planned to meet in the afternoon. The Chiefs will spend the week in Kansas City before departing for Miami, where the festivities begin in earnest with opening night next Monday at Marlins Park.