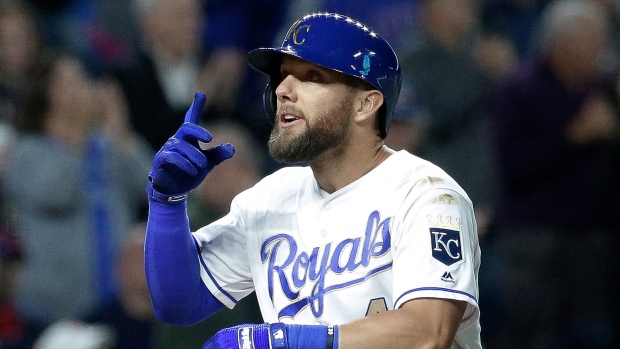 KANSAS CITY, Mo. — The Kansas City Royals signed outfielder Alex Gordon to a $4 million contract for next season, giving the rebuilding club a veteran presence in what is expected to be a young lineup under new manager Mike Matheny.

The 35-year-old Gordon, a three-time All-Star, won his seventh Gold Glove last season to move within one of Frank White for the most in franchise history. He committed just one error in 146 games played in the outfield. His seven outfield assists tied him for third among big league left fielders, and his .266 batting average was his best since the 2015 season.

Gordon was even called upon to pitch twice in games that got out of hand.

One of the club's most popular players, Gordon said late last season that he was leaning toward returning in 2020 but wanted to spend some time discussing his future with his family. The move also had to make financial sense for the Royals, who signed him to a $72 million, four-year contract in January 2016. The deal included a $4 million buyout on a mutual option for this season, and $500,000 of that was paid during the season to lower the amount to $3.5 million.

Gordon, who plans to discuss his deal at the Royals' annual fan festival Friday, will likely return to right field but also have some designated hitter duties. Whit Merrifield will handle centre field and Hunter Dozier will move from third base to right field after the club signed free agent Maikel Franco to fill out his spot on the left side of the infield.

The Royals are keen to give Bubba Starling and Brett Phillips opportunities, since both backup outfielders are out of options. And there is a chance that youngsters such as Khalil Lee could arrive from the minors later this season.

“So excited to have this guy back on the field and in the clubhouse,” Merrifield said.

Gordon was the second overall pick of the Royals in the 2005 amateur draft after a standout career at Nebraska. He got off to a slow start while adjusting to professional baseball, but his move from third base to the outfield turned out to be crucial to his success. He quickly became one of the game's premier defensive players, and his offence eventually came along.

Gordon already is among the top 10 players in Royals history in several categories, including fourth in homers with 186 and sixth in hits with 1,609. He also is sixth in franchise history with 738 RBIs.

“He is one of the most driven players in the game today,” Royals general manager Dayton Moore told MLB.com. “He represents everything the league wants in a player. He can still play at a high level, and he is willing to do whatever it takes to help the team win. He is the player that everyone strives to be.”