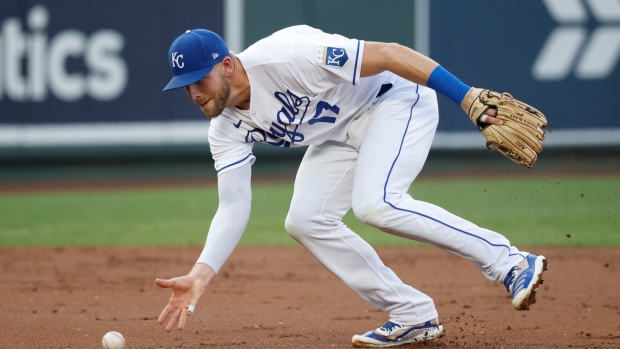 KANSAS CITY, Mo. (AP) — Michael A. Taylor’s two-out single in the bottom of the 10th inning drove Hunter Dozier home from second base as the Kansas City Royals beat the Chicago White Sox 3-2 on Wednesday night.

The Royals had tied the game at 2-2 in the bottom of the ninth when Salvador Perez hit his 24th homer, a solo shot to left-center off AL saves leader Liam Hendriks.

“I was just trying to do my job, hit the ball hard,” Perez said of his home run.

Scott Barlow (3-3), who took over in the 10th as the fifth Royals pitcher, struck out two and walked one. Ryan Burr (2-1) pitched the final inning for Chicago.

Kansas City opened the 10th when Hanser Alberto’s sacrifice bunt sent Andrew Benintendi to third. Dozier reached on a fielder’s choice and moved to second after shortstop Tim Anderson threw home to get out Benintendi. Taylor then singled to center for his fourth career game-ending RBI.

“I was just looking for a good pitch to hit,” Taylor said. “With two strikes, I’m not even sure what I hit right there.”

White Sox starter Lucas Giolito allowed one run on four hits in six-plus innings, walking one and striking out seven. Giolito is 5-1 all-time in Kauffman Stadium with a 2.74 ERA (19 earned runs in 62 1/3 innings). He has had 10 quality starts in his 10 starts in Kansas City, allowing no more than three runs in any of them.

“I felt pretty good. I felt like my stuff was playing well, especially my slider,” Giolito said. “It was one of the best slider nights I’ve had this year. I want to build off that.”

“We were getting no-hit,” he said. “We were having trouble making anything happen and he had it all working.”

Kris Bubic allowed two runs on five hits in six-plus innings for Kansas City. He walked one and struck out three.

The White Sox scored twice in the fifth. Bubic gave up singles to Andrew Vaughn, Leury Garcia and Danny Mendick on a hit up the middle that scored Vaughn. Center fielder Taylor’s throw home was off line, but catcher Perez threw to second. Garcia scored when Whit Merrifield chased Mendick back to first.

The Royals finally scored when Giolito allowed back-to-back doubles to Perez and Jorge Soler to start the seventh.

BLOWN SAVE, NO K

Hendriks, who had his sixth blown save in 31 chances, retired the other three batters he faced without a strikeout. That ended his streak of at least one strikeout in 17 consecutive games, the longest by a White Sox reliever since Tommy Kahnle's club-record 26 games in 2017.

The White Sox send LHP Carlos Rodon (8-4, 2.24 ERA) to the mound Thursday afternoon for the finale of the four-game series. The Royals will counter with RHP Carlos Hernandez (1-1, 5.72 ERA), making his third consecutive start after previously pitching out of the bullpen.