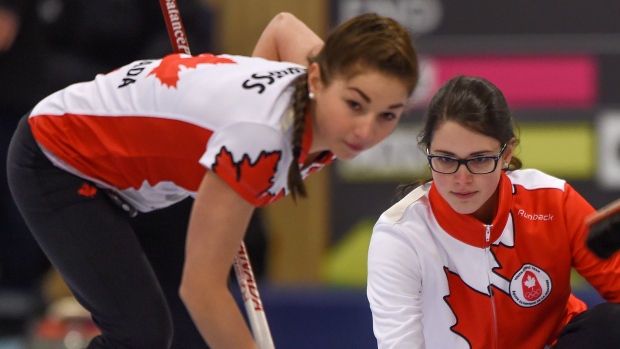 A championship at the 2020 Canadian playdowns can give her yet another achievement: a record-breaking third women's national title at the event.

The 21-year-old University of Manitoba kinesiology student is representing a different province this time around. She previously won out of Nova Scotia as a second with Mary Fay (2016) and Kaitlyn Jones (2018), but moved to Manitoba in the off-season to play with skip Mackenzie Zacharias.

"We just kind of clicked together and we've all become best friends," Burgess said. "It's been super smooth and it's just been so easy with these girls."

Joining Burgess for the move from Nova Scotia was lead Lauren Lenentine, an alternate for the Jones team at the 2018 worlds. Zacharias's younger sister, Emily, rounds out the lineup at second and their father, Sheldon, serves as coach.

Jones, who moved on to the women's circuit this season, won bronze last year. Burgess reached out to Zacharias afterward and the new-look foursome made a quick connection on the ice.

"I kind of took a little bit of a risk coming from Nova Scotia to move here where there's so many more teams and to get out of the province is just a little bit harder," Burgess said from Winnipeg. "So I took a risk coming here but playing with these girls has been so good and we just had a great provincial run.

"So I'm just really grateful for that."

Two members of Selena Sturmay's winning Alberta team are back to defend their title. Abby Marks has moved to the skip position from vice-skip and second Paige Papley moved up from lead.

Northern Ontario's Kira Brunton, the 2017 Canadian U18 champion, is also in the field.

There will be a new men's champion after three-time winner Tyler Tardi of B.C. joined the men's ranks.

Yukon and Nunavut were unable to field men's teams for this event. Organizers filled out the 14-team field by adding extra teams from Manitoba and B.C.

B.C. was given a second entry as the host province while Manitoba was the highest-placed team behind B.C. at the 2019 playdowns.

The top four teams in each gender will advance to a championship round ahead of the playoffs. Finals are set for Jan. 26.

The winning teams will represent Canada at the Feb. 15-22 world junior curling championships in Krasnoyarsk, Russia.