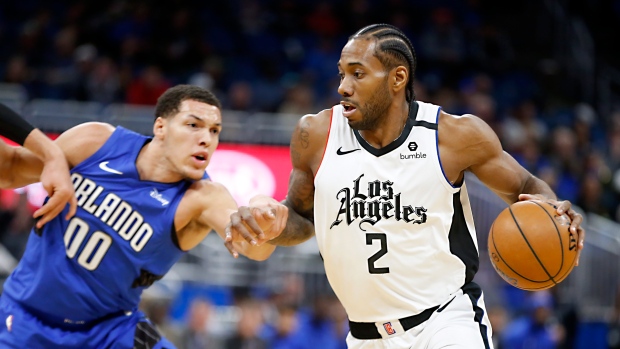 ORLANDO, Fla. — The Los Angeles Clippers won a game nobody wanted to play.

The tipoff was less than four hours after the Clippers and Orlando Magic learned of the death of former NBA great Kobe Bryant at the age of 41.

"Sometimes the stage is the best place to get away from reality," observed Clippers coach Doc Rivers. "I thought our guys had a two-hour break from an emotional day."

Kawhi Leonard scored 15 of his 31 points in a big third quarter and the Clippers won 112-97 for their sixth victory in seven games.

"It was a tough night for both teams, both coaches. You could just feel the game didn't have a lot of energy in it," Rivers said. "We told our guys, you want to honour (Bryant), go win the game, and they did that.

"We're not prepared for this, none of us were. A lot of relationships Kobe had with guys in our locker room. I was worried. I didn't know if our guys could get through it."

No Clippers were available after the game, but Magic forward Aaron Gordon expressed the players' point of view.

"It was just hard, but at the end of the day we've got to go out there and do our job," Gordon said. "It's what he would have wanted."

Leonard scored seven straight points for the Clippers in the big third quarter to help Los Angeles stretch a four-point lead to 10.

Landry Shamel and Montrezl Harrell scored 19 points each for the Clippers and Lou Williams added 15.

Leonard also had 14 rebounds, leading Los Angeles to a 53-45 advantage.

Michael Carter-Williams came off the bench to lead Orlando with 15 points. Nikola Vucevic added 13 for the Magic, who have lost five of six. They shot 35.4 per cent for the game.

"We missed shots and it sapped our energy," Magic coach Steve Clifford said. "Our lack of shooting really impacted our defensive mentality and we can't play that way."

Orlando led 37-26 after starting the second quarter on a 9-0 spurt. Williams' three free throws started a 21-8 run that pulled the Clippers ahead, and Leonard's scoring burst in the third quarter helped them expand their lead to 19.

The Magic didn't get closer than seven again.

It was the Clippers' 13th straight win over the Magic.

Clippers: Williams (11 points) and Harrell (6) were the only Clippers to score in a first-half stretch of more than 10 minutes. ... F Paul George missed a ninth straight game with a hamstring injury. ... G Patrick Beverley sat out a third straight game with a groin injury.

Magic: G D.J. Augustin missed a seventh game with a left knee injury. ... F Maurice Harkless, who started for the Clippers, was in the Magic's starting lineup on Nov. 6, 2013, the last time they beat the Clippers.

Clifford used his coach's challenge with 8:09 left in the third quarter. The challenge was "successful" in overturning a foul called on Gordon, but the replay showed a foul on Khem Birch, and Leonard got the two foul shots anyway.