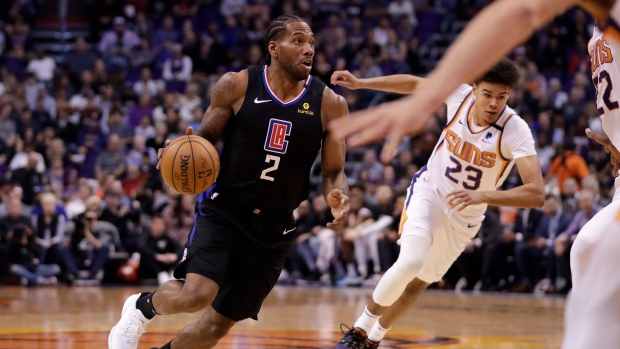 The two newest Clippers had big moments in their team's 102-92 victory over the Suns on Wednesday night. As the games get more important heading into the final months, Clippers coach Doc Rivers says it won't be the last time they're needed.

“They're both going to win at least one playoff game each for us,” Rivers said. “You just know that. You know how the games are going to go. We're going to need a big shot here or there, and one or both of them will make one.”

Kawhi Leonard led the Clippers with 24 points and 14 rebounds while Morris finished with 18. Jackson had 12 points off the bench and made 4 of 6 shots, including 2 of 4 from 3-point range.

Los Angeles won its second straight game, bouncing back from a tough stretch that included its only three-game losing streak of the season. The Clippers are still working to piece together their upgraded playing rotation, which includes the recently acquired Morris and Jackson.

Their newfound depth was on display in Phoenix. The Clippers used 10 players and all of them played at least 16 minutes. Leonard was the only one who had to play more than 30 minutes.

“We're just trying to be on the same page right now,” Leonard said. “It's only been two games that we've won, so it's nothing too huge. We've got to keep going.”

The Clippers led by as many as 15 points during the third quarter before settling for a 76-66 advantage going into the fourth. The Suns never cut the deficit to less than seven in the final quarter.

It was a disappointing start to a six-game homestand for Phoenix, which is among several teams fighting for the eighth and final playoff spot in the West. Memphis is at No. 8 right now, but Portland, San Antonio, New Orleans, Sacramento and Phoenix are all within five games.

Deandre Ayton led the Suns with 25 points and 17 rebounds. All-Star guard Devin Booker had a rough night, scoring 14 points on 5-of-19 shooting. Phoenix shot just 39% from the field and Leonard's defence on Booker was crucial.

“He's amazing with his reach, his hands, his foot movement,” Rivers said. “He's very smart and extremely strong. I thought that set the tone for us for sure.”

“I've been in this situation where you feel like you can't put a rock in the ocean and tonight I felt like they were good shots," Booker said. “A lot of open shots, maybe too open, but that's part of the game. It's a make or miss league at the end of the day and if you're not making shots, it's tough to win.”

Phoenix led for most of the first half, but the Clippers rallied for a 54-49 lead at the break. Leonard had 12 points for the Clippers, while Ayton led the Suns with 14.

Suns: F Kelly Oubre Jr. didn't play because of a right knee injury. Coach Monty Williams said he didn't know how much time Oubre would miss. The 24-year-old is the team's third-leading scorer, averaging 18.7 points. It was just the third game he's missed this season. ... Coming into Wednesday, Ayton and Giannis Antetokounmpo are the only two players in the NBA averaging at least 20 points and 12 rebounds in February. ... Ricky Rubio finished with 18 points and 10 assists.

The Clippers return home to face the Nuggets on Friday.

The Suns continue their six-game homestand against the Pistons on Friday.