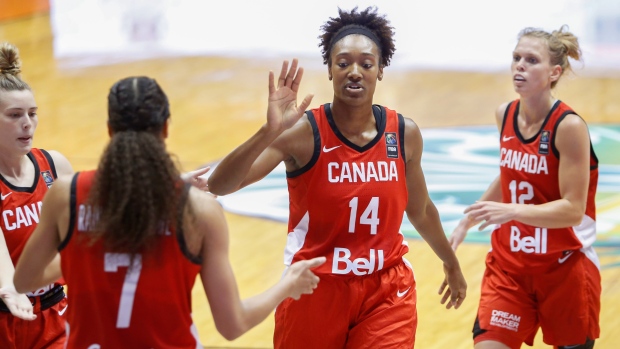 SAN JUAN, Puerto Rico — Kayla Alexander had a game-high 23 points and 15 rebounds to lead Canada's women's basketball team in a 87-51 rout over Cuba on Monday at the FIBA AmeriCup.

The tournament is the first step in qualifying for the 2020 Tokyo Olympics.

Nayo Raincock-Ekunwe and Sami Hill added 12 points apiece for the Canadians, who earned their second victory in as many days at the AmeriCup. Bridget Carleton chipped in with 10 points.

Anisleidy Galindo led Cuba with 15 points and Yamara Amargo had 12.

A slow start had Canada trailing for much of the first quarter but Miah-Marie Langlois drained a fadeaway in the final few seconds of the frame to give the Canadians a slim 14-13 advantage after 10 minutes.

"It was a bit of a rough start but I thought in the second half we really picked it up and started playing our game," Alexander said. "Our defence was really on point and we were playing well as a team. I think our defence created a lot of offence for us and as a team we rebounded well.

"I think we played good team basketball tonight and can continue to build on that."

Canada is the two-time defending FIBA AmeriCup champion, and has climbed the medal podium in seven of the last eight AmeriCup tournaments.

The top two teams from each group advance to the semifinals, with the winners of each semifinal advancing to the Sept. 29 final.

Canada, ranked fifth in the world, is in Group A with Mexico, the Dominican Republic, Cuba, and host Puerto Rico.

The Canadians opened the tournament with a 109-53 victory over Mexico on Sunday. They play Puerto Rico on Tuesday and the Dominican Republic on Thursday.