TSN Original: The Sound of Thunder

Last Monday’s news that undrafted University of Maine defenceman Brady Keeper signed with the Florida Panthers may not have made much of a splash around the hockey world, but it was cause for raucous celebration in Cross Lake, Man.

Students were dancing outside of Mikisew School after Keeper became the first person from the Pimicikamak Cree Nation to make it to the NHL.

Keeper, 22, joined the Panthers for their morning skate last Tuesday in Dallas and coach Bob Boughner said he expected to work him into the lineup in the coming days.

He will make his NHL debut Thursday night against the Senators in Ottawa.

“It’s unbelievable,” Keeper said on the phone after last Tuesday’s skate. “I’ve been dreaming of this moment for a long time. I can’t believe this is actually real.”

It may be equally as unbelievable for kids back in remote Cross Lake, a reserve 10 hours north of Winnipeg. Cross Lake became a national story in Canada in 2016 when five teenagers in the community committed suicide, while 140 others attempted suicide in the weeks that followed – prompting Cross Lake to declare a state of emergency.

Keeper’s story is a breath of fresh air, an enormous positive for an entire generation of indigenous youth.

“It gives them hope. It’s very powerful,” said Jordin Tootoo, who played 723 NHL games by way of Rankin Inlet, Nunavut, and now mentors Aboriginal kids throughout the country. “They see guys like me and Brady, guys who have seen a lot of things on reserves and in remote communities, and let’s them know that anything is possible.”

Keeper’s path is incredible. In less than two full seasons, he will have risen from the Manitoba Junior Hockey League to the NHL.

But his dream almost ended before it began. Keeper wanted to quit after exactly two days of summer classes at Maine in 2017.

“He called me and said, ‘I can’t do this. I’m going home,’” said Dean Grillo, Keeper’s then advisor and now agent with O2K Sports Management. “He actually booked flights home.”

He booked three or four flights back to Manitoba – maxing out his credit card in the process – but he never got on the plane.

Instead, he leaned on Tootoo for guidance. Like Tootoo, Keeper played for the MJHL’s Opaskwayak Cree Nation (OCN) Blizzard in the MJHL, where he first popped up on the radar of scouts.

Keeper was already father to a baby boy and stepfather to another when he arrived on campus in Maine at the age of 20.

“I talked to him many times as he was contemplating hanging up his skates,” Tootoo said. “There were lots of issues at home, lots of things going on back on the reserve. I knew exactly what he was going through. The biggest hurdle is leaving home. I remember having a conversation with him, telling him to live in the moment. Because anyone watching him knew he had what it takes to make it.”

Grillo only needed to see two periods watching Keeper one night in Portage, Man., to know that he wanted to represent him. At 6-foot-2 and 194 pounds, Keeper is a dynamic defenceman who netted 44 points in 73 games at Maine. He hit five posts in last weekend’s season-ending series at Northeastern University in the Hockey East playoffs.

He managed to fly relatively under the radar as a junior player after a playoff loss that kept the Blizzard out of the RBC Cup, Canada’s Junior A national championship.

More NHL teams would have been onto him then, like they were to fellow Aboriginal player Zach Whitecloud, who signed with the Vegas Golden Knights last year as an undrafted free agent after his sophomore season at Bemidji State in Minnesota. Grillo kept telling Keeper to follow Whitecloud’s path.

“There were definitely times I wanted to quit,” Keeper said. “I tried out for Midget AAA teams and I was cut three times in two years. My dad didn’t force me to do anything, but he said, ‘If you want it that bad, you will keep going.’ I came back.”

More than a handful of teams were interested in signing Keeper, but the Panthers were in on him the earliest. They tried to convince him to leave Maine after his freshman season.

Keeper said it was a tough decision because the coaches at Maine “treated me like I was their own son.” But his dream and dollars awaited. Money was tight - Keeper had exactly 63 cents in his bank account on Monday when he signed. A mentor paid for Keeper’s baggage fees at the airport in Maine just to send his sticks and equipment on to Florida. 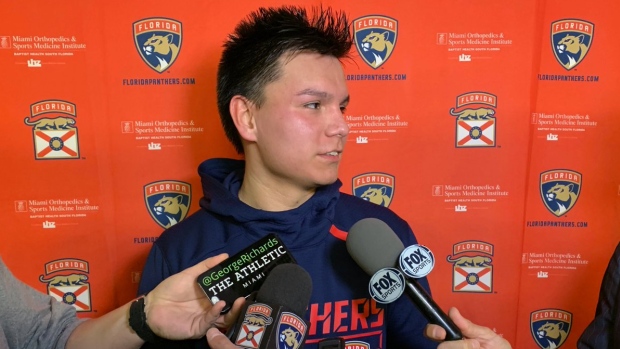 “This is arguably the coolest signing I’ve ever been part of,” Grillo said. “You know, we’ve had some clients sign for $60 or $70 million – and that’s life changing. But this is really life changing.”

“It will be a huge event,” Tootoo said. “I’m so proud of the kid. Mental health is such a huge epidemic in Indigenous populations. I don’t think he even realizes the impact he will have.”

Tootoo said he couldn’t think of one other player from that region to make it to the NHL. Keeper mentioned Konrad McKay, from nearby Wabowden, Man., as an enforcer who fought his way to a six-game run in the AHL. He said his next-door neighbour, Lynette Kryminski, also climbed to the Div. III ranks in the NCAA.

So Boughner has now called his No. 25 and Keeper will be the first to star in The Show.

“I’ll be skating and working hard here. ... I’ll be ready,” Keeper said. “This means that anybody can do it. If you put your mind to it, work hard, and stay away from the wrong things, you can do it, too.”