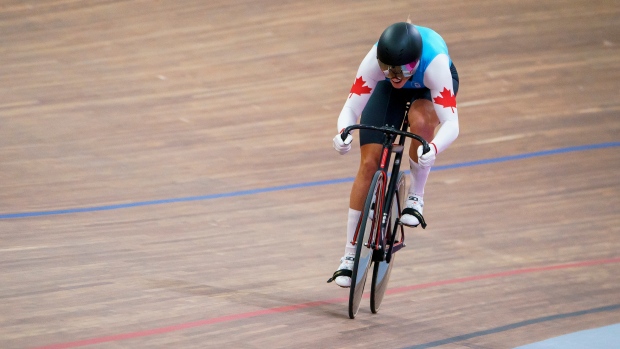 "It feels amazing," said Benfeito. "It's the first time I won the individual. I have two bronze medals in the two past Games in 2011 and 2015 so it's nice to finally get on top."

Benfeito and McKay will be partners in the 10-metre synchronized diving event on Sunday.

"[McKay] makes me nervous," said Benfeito. "I absolutely needed an amazing dive on my last dive and I had to beat her score...But it’s amazing because she helps me as an individual diver and as a synchronized diver. Makes me jump higher, makes me work harder.

That’s one thing I really appreciate about her. I mean, I couldn’t have missed anything if I wanted to win, she wasn’t going to just hand it to me so I think that’s something that I appreciate.”

McKay said she wasn't expecting to win her first medal at her first multi-sport Games.

"This event was really, really strong and everybody was diving at their best. On the fourth dive, I don’t usually look at the scoreboard, but I knew where I was standing and that put a lot of pressure on me as I knew I had to put my dive down. But I mean, overall, I’m really proud of myself, especially how far I’ve come this year individually. This is just the cherry on top.”

On the men's side, Canada's Phillipe Gagne and Francois Imbeau-Dulac won silver in the three-metre synchronized springboard.

Canada’s men’s baseball team will get a shot to win a third consecutive Pan Am Games gold medal tomorrow night against Puerto Rico. Canada advanced to the championships after defeating Nicaragua in Super Round action 10-0 on Saturday. Canada secured gold medal wins over the United States in 2011 in Guadalajara and in 2015 in Toronto.

“It should be fun, our guys will be ready,” said Manager Ernie Whitt. “We’ve got such great chemistry on this team with a group that plays hard for one another.”

Mitchell will be up against Mexico's Jessica Salazar Valles on Sunday in the sprint event.

Mexico's Luz Gaxiola Gonzalez edged Amelia Walsh of Ayr, Ont., in the quaterfinals. Walsh will compete against Guatemala, Colombia and Cuba in the semifinals.

She completed the qualifying for the 200-metre race in 10.89 seconds, topping the field and beating the previous Pan Am record time of 10.992 set by Canadian Monique Sullivan at the 2015 event in Toronto.

Canada finished the first round with a 14-1 win over host Peru on Saturday. Canada is 3-0 at the Pan Ams.