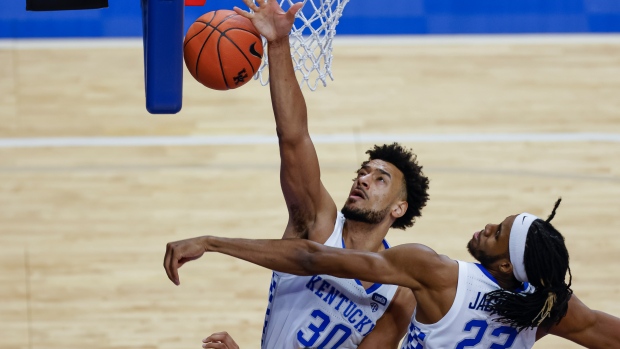 LEXINGTON, Ky. — Kentucky senior forward Olivier Sarr has declared for the NBA draft and will forego his remaining collegiate eligibility after one season with the Wildcats.

The 7-foot Frenchman transferred last year from Wake Forest and averaged 10.8 points, 5.2 rebounds and 1.2 blocks per game. Sarr shot 47%, including 12 3-pointers on 46% accuracy, and 79% from the free throw line. He also provided experience and leadership for a young Wildcats squad that ultimately missed the NCAA Tournament with a 9-16 finish.

In a release Sarr said he was blessed “to have learned from two great coaches” at Kentucky with John Calipari and Danny Manning at Wake Forest. Calipari said Sarr “really improved” in his lone season with the Wildcats and added, “He is only going to get better.”

Sarr, who will graduate next month with a communications degree, joins Brandon Boston Jr., Terrance Clarke and Isaiah Jackson in the draft. Jackson has left open the option of returning to school.