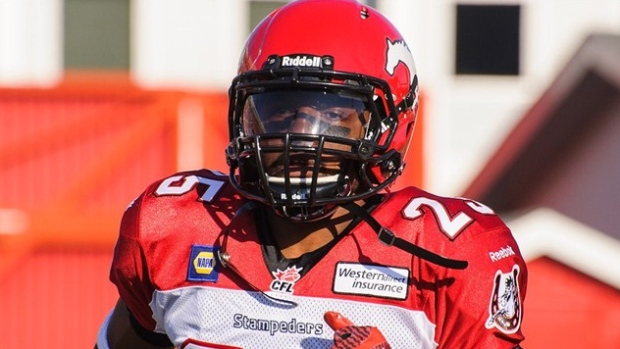 Keon Raymond is taking another run at the CFL Players' Association presidency.

The former CFL linebacker ran for the post two years ago, losing in a tie-breaker vote to Canadian Jeff Keeping. Raymond, a 37-year-old native of St. Louis who calls Calgary home, will vie for the position again this week at the union's annual general meeting in Las Vegas.

Raymond and Elimimian are attempting to become just the second American to head up the CFLPA. George Reed, a Hall of Fame running back with Saskatchewan, did so twice (1972-81,1986-93).

Keeping became president in 2016 but isn't seeking re-election. However, he's pleased to see much interest in the job.

"We always want our players engaged, active and participating," Keeping said. "The more guys who're passionate about it, the better it is and stronger we are.

"That's the type of culture we've tried to create and build an organization guys are proud of and want to be a part of for the right reasons."

Raymond said the CFLPA's top job wasn't on his radar this time last year. But that changed last May when the union and CFL hammered out a new three-year collective bargaining agreement.

"A couple of GMs across the league who I know and players reached out and said, 'Man, you need to run for president. Those guys need a leader,'" Raymond said without providing specifics. "I wasn't interested at the time.

"I'd started a business here in Calgary (the Big Time Players 7v7 Football program) and that's where my focus was, to help grow the game of football because it's done so much for me."

The CBA called for $50,000 annual increases in the salary cap with minimum salaries jumping from $54,000 to $65,000 starting this year. Medical coverage for injured players — a union priority during negotiations — went from 12 months to 36 months currently.

In addition, the deal offered protection for some veteran Americans. A maximum of three per game will count as Canadian starters if they've played three straight years with the same CFL team or four years in the league.

The agreement, effective this year, also gave players the right to work out for and sign with NFL teams during the "NFL Option Window," at season's end. But the union contends the CFL added restrictions to that which both the NFL and NFLPA wouldn't sign off on.

In December, the CFLPA filed a grievance against the CFL to remove those restrictions. It's also grieving the Calgary Stampeders' refusal to let American linebacker Nate Holley — the league's top rookie last season — out of his contract, which is through 2020, to pursue NFL opportunities.

"From my observation, there was no clear-cut understanding of what it looked like for those guys going down (to NFL)," said Raymond. "It was just kind of, 'Yeah, this could work.'

"There was no third party involved so I think the CFLPA agreed with the CFL without adding the NFL and NFLPA. You can't be mad at a guy who wants to go (to NFL) and have an opportunity to support his family. You play two, three years down there and get a Cam Wake deal (the former CFL star signed three-year US$23-million contract with the Tennessee Titans last March) and it changes your life, it changes generational lives."

"That's a big part of why guys are leaving," he said. "I think there's money out there but I think we need to work together and try to find ways to increase it."

The reality is the enhanced medical benefits come at a cost. The feeling was that money was better spent on helping players recover from injury to either continue their careers or transition to others outside of football than further boosting the cap.

"Everyone involved would love to see our players getting paid more," Keeping said. "It was an absolute, unwavering priority for our players to increase their protection with extended medical coverage.

"Those decisions cost money and that's something we were able to negotiate, make a priority for our players and deliver and I'm very proud of that and won't shy away from it. I applaud our entire bargaining committee, which worked tirelessly through the process and never blinked at what the priorities were. That was made very clear and easy because our players were so passionate about what we needed to achieve."

Elimimian and Dyakowski also were on the executive, serving on the union's bargaining committee last year.

Raymond said it's important the CFLPA help grow grassroots football, something he feels intimately familiar with.

"I think this job requires somebody who has an infinite passion for football," Raymond said. "It has to be where a guy is out and getting kids involved and playing the game of football.

"You see (Ambrosie) going across the world to grow the game. Where I'm from and my grandfather always told me, 'You take care of home first.'"