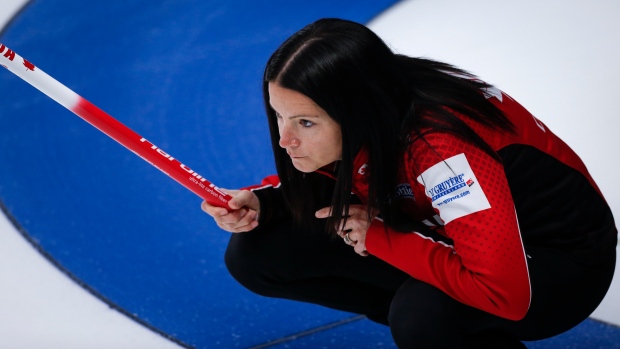 Kerri Einarson kicked off play in the Calgary bubble by winning a Canadian women's curling title. She's hoping to close out the seven-event schedule at the Markin MacPhail Centre with a world championship.

After being denied the opportunity to play in last year's world playdowns when they were cancelled on the eve of competition due to the pandemic, Einarson and her Manitoba-based team will finally get to represent Canada when the 2021 LGT World Women's Curling Championship begins Friday.

"Going into last year we were really confident," Einarson said. "We had just come off a big win and I think we feel the same way this year.

"We've had a couple really great events here in the bubble and we've been playing really well. So we're just carrying that going forward and keeping that confidence."

"It definitely gives us momentum going into the worlds," Einarson said. "So we're very excited to start. In that final game, we played really well so it's something to carry forward."

The world championship will serve as the main Olympic qualifier for the 2022 Beijing Games. Einarson's team of Val Sweeting, Shannon Birchard and Briane Meilleur can lock up a berth for Canada with a top-six finish.

"I think they're capable of anything," said team alternate Krysten Karwacki. "These girls are so incredible and hard-working on and off the ice. They absolutely have what it takes to win it all."

Canada has a stiff test in its round-robin opener Friday against reigning Olympic champion Anna Hasselborg of Sweden.

Both teams are expected to be contenders in a field that includes China, the Czech Republic, Denmark, Estonia, Germany, Italy, Japan, Korea, Russia, Scotland, the U.S., and defending champion Switzerland.

The leadup to the 10-day event was marked by a World Curling Federation announcement on Monday of two positive COVID-19 test results from pre-event screening, prior to entry into the competition bubble.

The event was given approval to proceed Wednesday by Alberta Health and medical officials, the WCF said. The federation statement also confirmed two individuals with the German team had tested positive.

The federation said that team would not be able to practise on Thursday. The team's status for the competition remained uncertain.

Teams that played in the Grand Slams have been staying in a different hotel than teams that recently arrived for the world championship. All individuals who recently arrived were isolated in a pre-competition quarantine hotel while COVID-19 response plan protocols were followed.

The world women's championship was originally scheduled for late March in Schaffhausen, Switzerland. It was cancelled in February due to the pandemic before becoming a late addition to the bubble calendar.

No tiebreaker games will be played at the WCF event. Head-to-head results will be the first tiebreaker for playoff spots and pre-game last-shot draw distances will be used if necessary.

The top six teams will qualify for the playoffs.

Teams ranked first and second will advance directly to the semifinals. They'll play the winners of the qualification games, where the No. 3 seed will take on the No. 6 seed and No. 4 will meet No. 5.

This report by The Canadian Press was first published April 29, 2021.