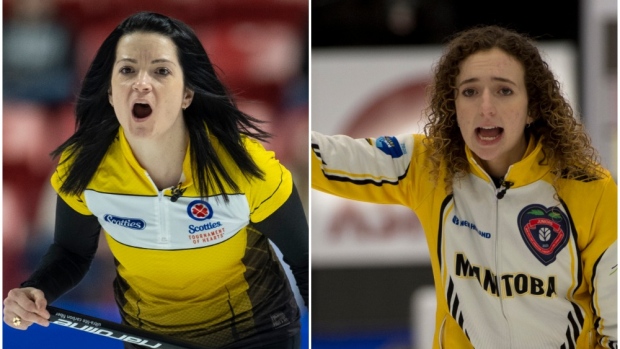 The wait for the return of curling is finally over as the 2021 Scotties Tournament of Hearts kicks off with a bang Friday night inside the Calgary bubble.

Defending champion Kerri Einarson and her rink out of the Gimli Curling Club in Manitoba take to the ice against provincial counterparts Team Mackenzie Zacharias, the reigning Canadian and world junior champions.

You can watch the clash between the two championship rinks at 8:30pm et/5:30pm pt on TSN1 and streaming on TSN.ca, the TSN App and TSN Direct.

Einarson, 33, and her top-ranked rink of third Val Sweeting, second Shannon Birchard and lead Briane Meilleur are wearing Team Canada colours this year after defeating Ontario's Rachel Homan in last year's final. The skip drew to the four-foot in the extra end to pick up the first Scotties title of her career.

The 21-year-old Zacharias leads a young foursome which includes Karlee Burgess at third, sister Emily Zacharias at second and Lauren Lenentine at lead. All members of the team are 22 or younger. Team Zacharias will represent Wild Card 2 in Calgary after Curling Canada expanded the field at this year's event to 18 teams. They are seeded No. 8 at the Scotties and 11th in Canada.

"We could not have seen this coming a year ago. Once we get to the Scotties it will be about a year since we won the world juniors,” Zacharias told TSN.ca in a recent interview. “We just didn't see this coming at all, and we're just so thrilled with the opportunity to get to go this year."

Team Zacharias will have the edge when it comes to playing time this year as her team were able to play in a pair of bonspiels back in October, making the finals both times and winning once.

Team Einarson, on the other hand, were only able to get one game in before the Okotoks Ladies Classic was shut down due to new restrictions implemented by the Alberta government in November,

The skip was able to get some practice time on Lake Winnipeg, however.

“We were grasping at straws trying to find somewhere,” Einarson told TSN's Bob Weeks. “Luckily enough my parents’ neighbour was building a skating rink and he asked if we wanted some room to throw rocks. So that’s what we did.”

Zacharias and Einarson represent two of five Manitoba-based teams at this year's Scotties. The two skips have squared off twice in the past with Einarson taking both matches.