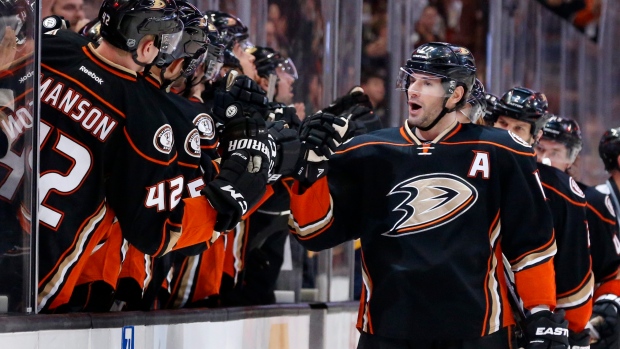 ANAHEIM, Calif. - The Anaheim Ducks became the third straight team to get the extra point against the St. Louis Blues after rallying from a two-goal deficit.

Ryan Kesler tied the score on a power play with his second goal of the game early in the third period, Ryan Getzlaf got the deciding goal in the fourth round of the shootout, and the Ducks beat the Blues 4-3 Friday night.

"We knew we needed to buckle down and claw back," Kesler said. "We did a good job of it. It would have been tough not getting that extra point, but the guys battled hard and we deserved that extra point."

Corey Perry also scored for the Ducks and John Gibson made 25 saves.

Ryan Reaves, Troy Brouwer and Robby Fabbri scored for the Blues, who have lost five in a row (0-2-3) for the first time since dropping their final six of the 2013-14 season. They were coming off back-to-back overtime losses to Ottawa and Colorado in which they squandered two-goal leads in both games — and did it again against the Ducks.

"It's kind of been that way the last couple weeks for us. We get a lead, I think we start feeling a little bit too comfortable," Reaves said. "I think we put in a pretty gutsy effort tonight, but we've got to learn to bury teams in the third period. We're in a rut right now, and we're finding ways to kind of shoot ourselves in the foot."

"This was a playoff game — a sudden-death, elimination playoff game," Blues coach Ken Hitchcock said. "Both teams put in a hell of an effort, one of the grittiest efforts by our team all year. I'm sure they're proud of their effort, too."

The Ducks were trailing 3-1 when Perry scored his team-high 15th goal on a screened 25-foot wrist shot from the right circle with just more than 3 minutes to go in the second period.

Anaheim outshot St. Louis 19-2 in the third and tied it on a 30-foot wrist shot by Kesler that beat Brian Elliott to the short side on the power play 4:32 into the period. It was Kesler's eighth goal this season and fourth in four games.

"He played great," Getzlaf said. "He got two big goals tonight and was out there for the majority of the PK. Those are big things for our group, but we took a lot of penalties. A lot of guys didn't get to see a lot of ice, but our bench stayed consistent throughout the whole game."

St. Louis played the final two periods without centre Paul Stastny and defenceman Jay Bouwmeester because of upper body injuries. Bouwmeester was hurt when he was slammed against the glass by Getzlaf in the Blues' zone with 5:28 left in the first.

St. Louis outshot Anaheim 17-5 in the second period and scored three times to take the lead. However, Blues starting goalie Jake Allen was forced to leave the game at 7:03 of the period while his teammates were still celebrating the goal by Brouwer that put them ahead 2-1.

Allen sustained a lower body injury moments earlier when teammate Colton Parayko checked Perry into him in the crease. Elliott replaced Allen and stopped 27 shots the rest of the way.

Brouwer's eighth goal came on a 20-foot wrist shot from the left circle, after he got the puck from Joel Edmundson in front of the Blues' bench during a line change and beat Gibson to the stick side.

Fabbri then went in alone on Gibson after a Ducks turnover in the neutral zone and increased the margin to 3-1 with a short backhander with 3:35 left in the middle period. Perry started the Ducks' comeback just 31 seconds later.

"The big thing was getting the goal near the end of the second period," Ducks coach Bruce Boudreau said. "When they came in to the dressing room, they weren't with their heads down. They were angry, defiant and determined, and the third period was pretty good for us."

The Ducks, coming off their league-worst eighth shutout loss of the season, opened the scoring at the 3-minute mark of the first. Kesler carried the puck out from behind the St. Louis net and around the outside of the left circle before finding an open lane in the slot and beating Allen to the glove side with a 25-foot wrist shot.

NOTES: For the first time in 27 games, the Ducks had more power-play opportunities than their opponent (5-4). ... The Blues have scored no more than three goals in 27 of their last 30 games. ... The Blues have allowed eight power play goals in their last 12 games, after killing off all 21 short-handed situations over the previous nine. ... St. Louis was 0 for 4 on the power play against a penalty-killing unit that came in with the league's best percentage (89.1). The Ducks have killed off 26 in a row.