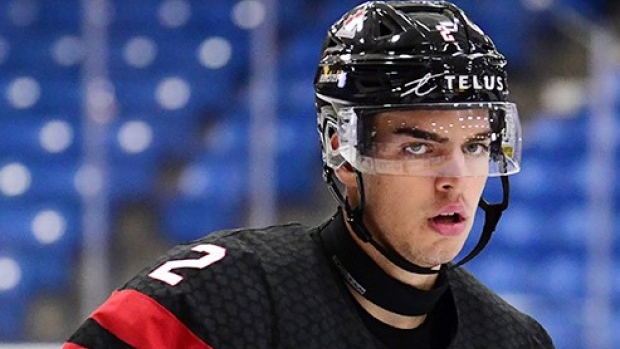 OSTRAVA, Czech Republic — He came in like a wrecking Bahl.

Team Canada behemoth Kevin Bahl is always on the hunt for a big hit. And it didn’t take long for Bahl – all 6-foot-7 and 245 pounds of him – to make his mark on the World Junior Championship on Boxing Day.

“I've taken a few big ones, yeah, that one was pretty big and hurt pretty good,” Brink said.

Bahl made eye contact with Brink in the neutral zone in the first period of Thursday’s opener and waited for the green light.

“I saw him look up to see if I was coming,” Bahl said. “Then I saw him put his head down and reach for the puck, and as soon as I saw that, I was turning for him.”

“You should have seen the bench when he had his hit,” said Team Canada assistant coach Andre Tourigny, who also coaches Bahl in the OHL. “Everybody was excited.”

The rest of the World Juniors will soon learn the disclaimer that’s been attached to him since he debuted with the Ottawa 67’s as a 16-year-old in 2016: Beware of the Bahl-dog.

“I have to put a little bit of extra protection on when I go there [to Ottawa],” said Quinton Byfield, who plays for the Sudbury Wolves.

Bahl, now 19, said he’s laughed at some of the puns that he’s seen on his phone since the start of the tournament. The possibilities are endless with his last name. It was Toronto Marlboros teammate Matthew Strome who came up with the Bahl-dozer in minor midget.

He actually just goes by Bahler with teammates and friends – and is simply Kevin to his mom.

But if he continues to lay out Russians on Saturday (12 p.m. ET on TSN 1/4/5), Bahl will be best known as a sizeable deterrent on the Canadian blueline.

Bahl helped set the tone for Team Canada in their tournament-opening win over Team USA. He said he ramped us his physical edge on the same first-period shift that first line forwards Alexis Lafreniere and Joe Veleno made a dent on the Americans on the forecheck.

“The crowd got into it. Our bench got into it,” Bahl said. “That was a big momentum changer for sure.”

Bahl said he was blown away by Lafreniere’s tenacity and physicality. That Lafreniere showed that edge had a ripple effect on the rest of the roster, he said.

“I didn’t really realize it. I thought he was all skill,” Bahl said. “But he loves to throw around the body. I absolutely love that. I saw him going full speed at the guy and he just dummied him. I thought, ‘Okay, I better get a hit up here,’ so I kind of saw that guy coming down the wall.”

Bahl wants to ramp up the physicality from puck drop against Team Russia, but Tourigny cautioned that Canada has to stay on the right side of the line. They were nearly burned by Team USA going 3-for-5 on the power play on Thursday.

Bahl, a native of Mississauga, Ont., has been smart and steady in his development, adding an offensive element to his game as he’s gained experience in the OHL. It has turned the second-round pick of the Arizona Coyotes (55th overall) into an intriguing prospect, which is why the New Jersey Devils acquired him before the NHL’s holiday trade freeze as part of the deal for Taylor Hall.

Teammate Ty Smith, who was the Devils’ 17th-overall pick in the same 2018 Draft, called Bahl a “big rig” but said his skating is underrated.

“He moves very well for a big guy,” Smith said before the tournament began. “He’s turning into a two-way guy as opposed to just defensive.”

For this tournament, at least, any offence would be a bonus. Team Canada will be thrilled to give opponents a heavy dose of the Bahl-dozer on the team’s shutdown pair with Jacob Bernard-Docker.

“I remember we play Ottawa, it’s a line match against Bahl and their D are hard to play against,” said Flint’s Ty Dellandrea. “He’s a heavy guy and he hits hard.”