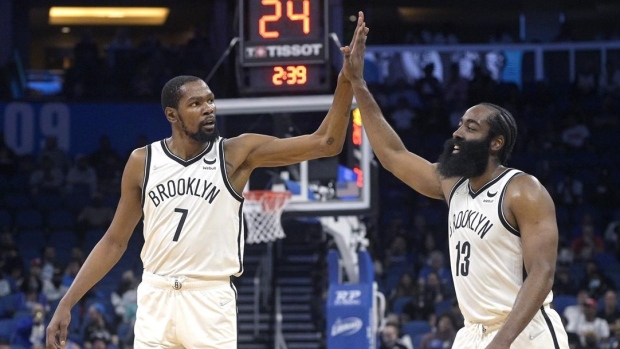 Durant, the NBA’s leading scorer at 29.5 points per game, made 11 of 12 shots, including both of his 3-point attempts, to help Brooklyn win for the sixth time in seven games. Harden had 17 points, 11 rebounds and 11 assists to help. The two stars sat out the fourth quarter, with the Nets up 94-75 after three.

LaMarcus Aldridge came off the bench with a big second quarter to put Brooklyn in command. He had 21 points and eight rebounds.

Terrence Ross led Orlando with 17 points, and Mo Bamba added 14 points and nine rebounds. The Magic shot 38% and made 4 of 33 3-point shots.

Aldridge hit three 3-pointers and scored 15 points in his first eight minutes in the game, helping the Nets pull out to a 19-point lead late in the first half.

Nets: The Nets didn't shoot a free throw until Harden stepped to the line following a technical foul with 4:34 left in the first half. . . . Harden, who is third in the NBA in assists, had six in the first quarter.

Magic: Cole Anthony, Orlando's leading scorer who was coming off a career-high 33 points Sunday, did not score until making a layup with 4:46 left in the first half. . . . Ross went over the 7,000-point mark for his 10-year career, finishing with 7,011.