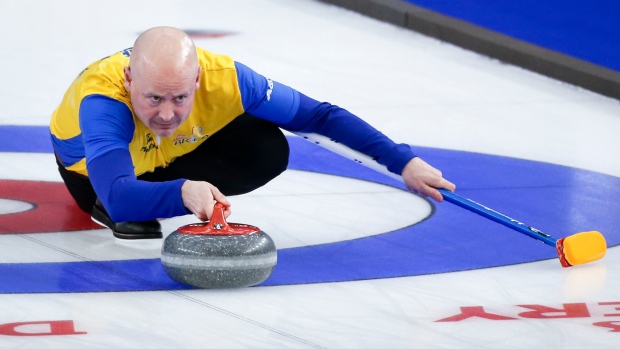 With the Tim Hortons Curling Trials just over a month away, many of Canada’s top rinks competed in big money bonspiels across the country this Thanksgiving long weekend.

One of the most notable matchups featured the last two male skips to wear the Maple Leaf at the Winter Olympics in Kevin Koe and Brad Jacobs going head-to-head in the championship game at the IG Wealth Management Western Showdown in Swift Current, Sask.

In the end it was Koe and his Calgary foursome hammering Jacobs of Sault Ste. Marie, 8-1, in the final.

Congrats to @TeamKoe on a brilliant grind this weekend at the @IGWealthMgmt Western Showdown, winning the hard way through the C-side.

Many thanks to Chris @Haichert on a brilliant event hosted by the Swift Current Curling Club! #curling

Team Koe, rounded out by third John Morris, second BJ Neufeld and lead Ben Hebert, put up a three-spot in the second end followed by steals in each of the next three ends as the two sides shook hands after just five ends.

Koe, who was a Brier finalist last year inside the Calgary curling bubble, took down Kody Hartung in the quarterfinal and Pat Simmons in the semi-final before meeting Jacobs.

Getting off to a slow 2-2 start meant Koe and company needed to reel off six straight wins to stay alive in the triple knockout tournament. Team Koe won the ATB Okotoks bonspiel last month in their first event of the 2021-22 campaign.

Jacobs’ playoff path saw wins over Matt Dunstone in the quarters and Colton Flasch in the semis.

Koe, 46, won the last Olympic Trials in 2017, but was unable to reach the podium at the Games. The 36-year-old Jacobs won four years prior and captured gold against the world’s best at the Olympics.

Both Koe and Jacobs will be in Saskatoon from Nov. 20-28 for the Olympic Trials.

The Brier champions led by Brendan Bottcher played the Western Showdown as well, but never found their groove and missed the playoffs with a 3-3 record.

For the first time in the bonspiel's 43-year history, an American team has won the Autumn Gold Curling Classic.

Chaska, Minnesota’s Team Tabitha Peterson, went 8-2 in Calgary and took out some major names in the process to pick up their second win of the young season.

Peterson, third Nina Roth, second Becca Hamilton and lead Tara Peterson defeated the likes of Kerri Einarson, Casey Scheidegger and Kelsey Rocque to qualify for the playoffs through the ‘C’ side in the triple-knockout event.

In the final eight, Team Peterson beat Scotland’s Eve Muirhead in the quarters, Canada's Chelsea Carey in the semis and Japan’s Satsuki Fujisawa in the final, 6-5.

The 32-year-old Peterson make a great run at the World Women’s Curling Championship last year inside the Calgary bubble and ended up on the podium with the bronze medal.

Peterson, Roth, and Hamilton actually represented the USA at the 2018 Olympics with Roth skipping and Peterson playing third. They finished with a 4-5 record and missed the playoffs. Peterson took over as skip to start the 2019-20 season and the change seems to have worked.

Team Peterson will be the No. 1 seed at the United States Olympic Trials next month, and if they can win it, they could be gold medal contenders at the Beijing Olympics in February.

Gushue Off and Running

Team Brad Gushue made the trip from The Rock to the Greater Toronto Area this long weekend to compete at the Stu Sells Toronto Tankard in their first event of the 2021-22 season.

The three-time Canadian champions didn’t need much time to get into form, posting a perfect 6-0 record to capture the triple-knockout bonspiel.

We did it! So happy to come out on top in our first spiel of the season! We're thrilled to be back on the ice competing!
Thanks to all who had a part in putting off a great tournament!
See you in two weeks in Oakville for the @grandslamcurl Masters on @Sportsnet pic.twitter.com/GYH7NoiAsr

Gushue, third Mark Nichols, second Brett Gallant and lead Geoff Walker squared off against Glenn Howard’s Ontario team in the final. The St. John’s skipped scored three in the eighth and final end for the 6-1 win.

Team Gushue also defeated John Epping in the semis and Jonathan Beuk in the quarters. Gushue and company have already punched their ticket to the Saskatoon Olympic Trials next month.

Jason Gunnlaugson and 2018 Olympic champion John Shuster both fell in the quarterfinal round.

On the women’s side of the draw, Woodstock’s Hollie Duncan won her second event of the season, beating Shannon Jay of the St. Thomas in the final, 8-2. Duncan beat Mackenzie Zacharias, who competed in her first Scotties Tournament of Hearts last year, in the semis and Jacqueline Harrison in the quarters.

Kerry Galusha, who is also having a very strong season, lost to Zacharias in the quarters. Danielle Inglis lost to Jay in the other semi-final.

Duncan, Zacharias, Harrison, Galusha and Inglis will all compete at the 2021 Olympic Curling Pre-Trials from Oct. 26-31 in Liverpool, N.S., where the final two spots for the Tim Hortons Curling Trials will be on the line.

Peter De Cruz will represent Switzerland at the Winter Olympics in February for the second time in his career after topping countryman Yannick Schwaller in a seven-game series late last month.

De Cruz, a four-time worlds bronze medalist, went 7-1 over the three-day event with victories over Scotland’s Bruce Mouat in the quarters and Schwaller in the semis.