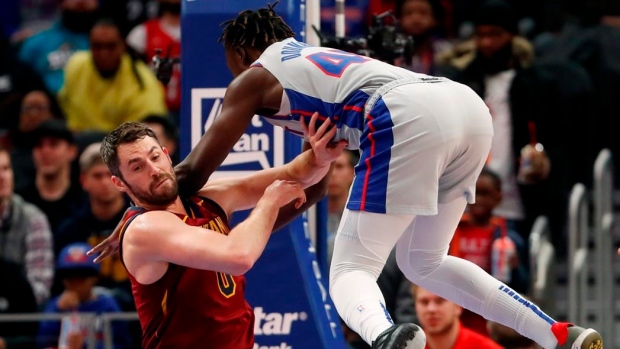 DETROIT — Before his team took the court, Cavaliers star Kevin Love spent some of his day looking back at Kobe Bryant's life and career.

“I watched his short film, I watched all of his highlights, I watched his interviews,” Love said. “I have videos on my phone, from the Olympics, from All-Star Games, where they're intimate and behind-the-scenes type of stuff."

Love was an Olympic teammate of Bryant's and played college basketball in Los Angeles at UCLA, so it felt fitting when he made six 3-pointers in the first half Monday night during Cleveland's 115-100 win over the Detroit Pistons. The Cavaliers snapped a seven-game losing streak.

It was the first game for either team since Bryant's death Sunday in a helicopter crash. The teams honoured Bryant's two uniform numbers when Cleveland committed a 24-second shot clock violation after the opening tip, and the Pistons gave the ball back with an 8-second violation in the backcourt. Fans observed 24 seconds of silence in Bryant's honour before the game.

Cleveland scored 24 points in the first quarter, and Love finished with just over 24 minutes played. Larry Nance Jr. — a teammate of Bryant's with the Lakers — scored 10 points for Cleveland in just under 24 minutes.

"Sometimes, it just happens that way," Love said. “Feels like sometimes it should, if you just go out there and do right by the game of basketball, like Kobe would have wanted.”

It was the third meeting this month between the Pistons and Cavaliers. They split a home-and-home series Jan. 7 and 9 in a pair of tightly contested games. This one wasn't nearly as close. Cleveland led 53-45 at halftime.

Love scored all 20 of his points in the first half and did not even need to attempt a shot in the final 24 minutes. It was 89-72 after three quarters. Cleveland had not won by double digits since a 108-87 victory at New York on Nov. 10.

“We talk about, you know, Kobe this, Kobe that,” Pistons coach Dwane Casey said. “Believe me, rest his soul, he would be embarrassed how we, our non-compete level.”

Collin Sexton had 23 points for the Cavaliers and Tristan Thompson added 17 points and 11 rebounds. Reggie Jackson led Detroit with 16 points.

“It's tough,” Pistons guard Langston Galloway said. “Knowing what Kobe stands for and what he embodies, that's what everybody in this locker room kind of grew up on. Kobe is an icon, a legend.”

The Pistons and Cavaliers have finished their four-game season series. The road team won every game.

Brandon Knight (left knee soreness) did not play for the Cavaliers.

Pistons: At Brooklyn on Wednesday night.