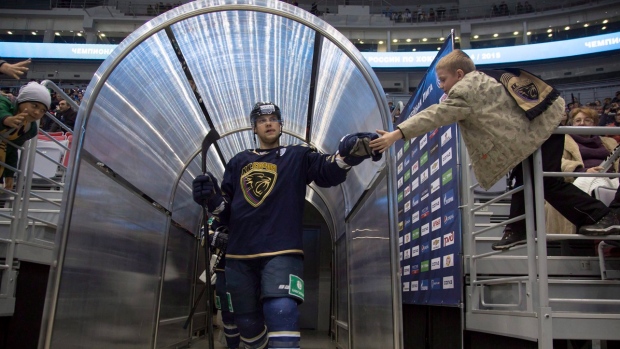 MOSCOW — The Kontinental Hockey League is considering shrinking from 29 to 24 teams following years of financial instability.

"Optimizing the number (of clubs) will help us to deal with the issue of cost-cutting related to player earnings," KHL president Dmitry Chernyshenko said on Tuesday in comments reported by state news agencies in Russia.

Chernyshenko said the league's analysis suggested 24 teams would be "optimal."

He accused some of the league's less successful clubs of relying on government money while dragging the standard of the league down with poor-quality ice hockey in near-empty arenas.

The KHL has long depended on cash from Russian state companies and regional governments to keep many of its teams afloat. Some teams have also failed to pay their players on time in recent seasons.

Croatian club Medvescak Zagreb is already due to leave the 29-team, eight-country KHL this summer. It will transfer to the Austria-based EBEL after four years in the KHL.

Chernyshenko said the KHL could still expand into Japan, China, South Korea, and Western Europe "in one or two seasons" despite the cuts, in comments reported by the Tass agency. It wasn't clear if those planned expansions would mean even deeper cuts to the KHL's existing teams.