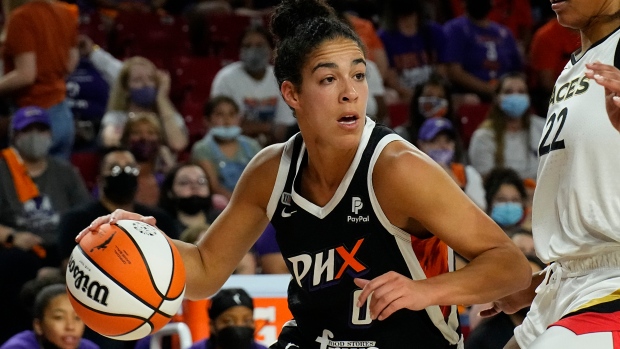 Canadian Kia Nurse left Wednesday's Game 4 against the Las Vegas Aces early in the first quarter with a right knee injury and did not return.

UPDATE: Kia Nurse is out for the rest of the Mercury-Aces game with a right knee injury.

Nurse suffered the injury just under 40 seconds into the game after taking a foul from A'ja Wilson of the Aces.

Trainers tended to Nurse on the court before she gingerly walked to the locker room. According to Ros Gold-Onwude of ESPN, Nurse will receive an MRI to determine the extent of the injury.

Phoenix's Kia Nurse exited tonight's semifinal game in the opening moments after suffering an apparent knee injury. ESPN's Ros Gold-Onwude reported that Nurse was able to walk on her own but was headed to get an MRI.https://t.co/tjKmag572H

Nurse appeared in 32 games during the regular season for the Mercury, her first season in the desert after coming over in a trade from the New York Liberty.

Las Vegas beat Phoenix on Wednesday to force a deciding Game 5 on Friday night. The winner will advance to the WNBA Finals against the Chicago Sky.