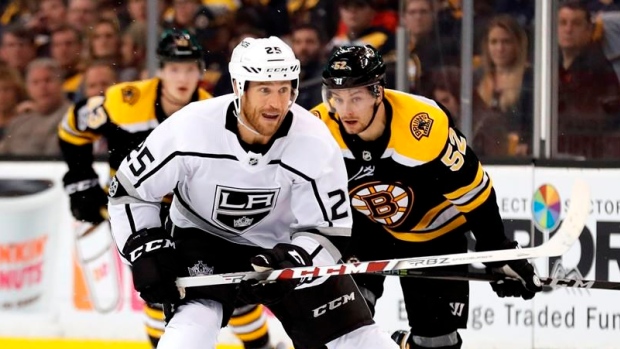 The Los Angeles Kings have placed forward Brooks Laich on unconditional waivers with the intent of mutually terminating his contract.

Laich's future is uncertain. Agent Roland Thompson did not immediately respond to a message seeking comment on his client's plans.

The Wawota, Saskatchewan, native attended Kings camp on a professional tryout agreement and continued skating with the team after he was released from it. The Kings signed Laich to a prorated deal for the league minimum $625,000 in mid-October after centre Jeff Carter underwent surgery to repair a cut on his left leg in the sixth game of the season.

Carter remains out indefinitely, but Laich had been a healthy scratch for five consecutive games and Los Angeles acquired forward Torrey Mitchell from the Montreal Canadiens on Thanksgiving. Laich, who had one assist in 12 games, was waived the next day.

Laich was out of the NHL all last season and played 27 games for the AHL's Toronto Marlies. Before that, he spent the vast majority of his career with the Washington Capitals.

In 776 regular-season games with the Ottawa Senators, Capitals, Toronto Maple Leafs and Kings, Laich has 134 goals and 198 assists for 332 points.

It wasn't immediately clear if Hockey Canada included Laich on its list of eligible players for the 2018 Winter Olympics that cannot include players on active NHL contracts. If GM Sean Burke included Laich, he would be a candidate to play for Canada in South Korea this February.

While Laich was the only player on unconditional waivers, a person with knowledge of the move said the Buffalo Sabres placed Seth Griffith on waivers. The person spoke to The Associated Press on condition of anonymity because the move had not been announced.

Griffith was waived and subsequently claimed three times last season. The 24-year-old centre has two goals and an assist in 18 games this season with Buffalo.