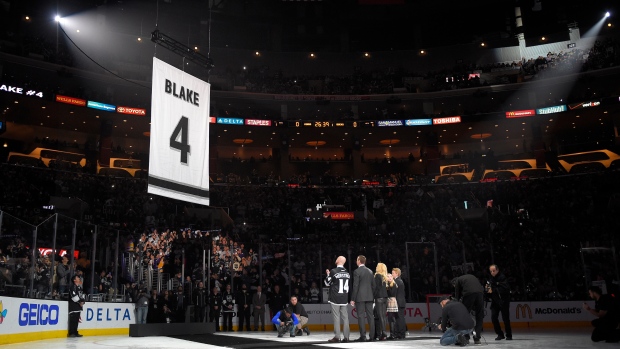 LOS ANGELES, Calif. - Rob Blake stood under a spotlight Saturday night and recalled his NHL debut in 1990. He remembered pulling on his first Los Angeles Kings jersey and skating out onto the Forum ice, dreaming of hanging his name and number high overhead.

"From Day One, I wanted to be up there one day," Blake said.

A quarter-century later, the bruising defenceman made it.

The Kings retired Blake's No. 4 jersey in a warm pregame ceremony, raising a banner honouring the Hockey Hall of Famer who delivered huge hits and scored big goals on their blue line for parts of 14 seasons.

The Kings recognized Blake during a ceremony before the defending Stanley Cup champions' game against the Anaheim Ducks at Staples Center. Roughly 40 former teammates and family members took the ice to recognize the versatile defenceman who served as Los Angeles' captain for six seasons.

"In my wildest dreams, I didn't think it would feel this good," said Blake, now an assistant general manager for the franchise.

Blake is the sixth player whose jersey has been retired by the Kings, a Second Six franchise that joined the NHL in 1967. Los Angeles also has retired the numbers of Marcel Dionne, Rogie Vachon, Dave Taylor, Wayne Gretzky and Luc Robitaille.

"I knew back then that we would stand here one day, from that first game I played with him," Robitaille said.

The honour caused Blake to reflect on hockey's proliferation in Southern California in the past 25 years. The Kings and Ducks have combined to win three Stanley Cup titles in the past eight years, and youth hockey is positively booming in the Southland, sending numerous players to the game's highest levels.

The Kings' recent success is particularly sweet to Blake — and not just because he works for the team again.

"The way the franchise has gone, believe me, with the team that's on the ice tonight with two Cups in the last three years, you're going to see a lot of those jerseys up there," Blake said.

Blake leads the franchise in points, goals and assists by a defenceman, and he won the Kings' first Norris Trophy in 1998. He was inducted into the Hockey Hall of Fame last year.

Not bad for a fourth-round pick from Simcoe, Ontario, who played at Bowling Green with slow-developing dreams of NHL stardom.

Blake developed into an elite defenceman in the early 1990s during the Kings' best previous run of team success before the current club, which has won two Stanley Cup titles in the last three years. Current Kings captain Dustin Brown played alongside Blake before the defenceman notoriously left for San Jose for his final two NHL seasons.

"We feel that you're finally back where you belong, where it all started, as a member of the L.A. Kings family," a visibly emotional Brown said during the ceremony. "You taught us what it was to be a pro, and you showed us what it really meant to be a teammate."

The Kings reached the 1993 Stanley Cup finals and lost, but Blake treasured the chance to play alongside Gretzky, Taylor and Larry Robinson, his childhood idol.

"I remember walking into the Forum for the first time and seeing him coming up and introducing himself to me, like, 'Hi, I'm Larry,'" Blake said. "Well, I knew that for the past 15 years. So it was special, for sure."

The seven-time NHL All-Star and Olympic gold medallist was a vicious hitter and an opportunistic scorer, leading the Kings through several mediocre seasons. When Staples Center opened in 1999, Blake bought a luxury suite for Kings games and donated the tickets to charities.

"No person has meant more to me and my career than Rob, and no player benefited more from playing with Rob than me," said Mattias Norstrom, Blake's defence partner and successor as Kings captain.

When the white banner was raised, Blake invited Norstrom to stand on his left side — their familiar alignment for all those years on the ice.

Blake won the Stanley Cup with Colorado in 2001, highlighting a productive five-year tenure with the Avalanche. Blake returned to the Kings amid much fanfare in 2006, only to leave the struggling club again in 2008 to play his final two seasons with the Sharks.

Many Kings fans expressed bitterness about Blake's two departures from Los Angeles, booing him regularly in his returns. But in July 2013, Kings general manager Dean Lombardi hired Blake as a vice-president and assistant GM, bringing him back to the franchise.

Blake realizes some Kings fans still haven't forgiven him, and that's fine with him.

"The good thing about fans in general — if you're not wearing their jersey, they're not going to be happy," Blake said. "And that's the way they should be. They back their team and look after it. I'm on their team now, but at least I'm out of shouting distance."