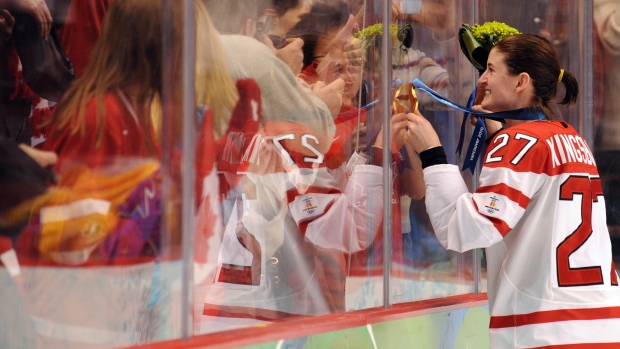 The 2021 IIHF Women’s World Championship is a tournament that has been two years in the making, but Gina Kingsbury’s work is just getting started.

Canada’s women’s hockey team is preparing for next month’s women’s worlds in Halifax and Truro, N.S. The Canadians will open the tournament May 6 against Finland. All of Canada’s games can been seen live on TSN.

Last year’s edition of the tournament was cancelled because of COVID-19, and the Canadians haven’t played together since the end of the Rivalry Series against the Americans in February of 2020.

“I know our players, our coaches, our staff are hungry to represent our country and are hungry to bring back gold to Canada,” Kingsbury, the director of Canada’s women’s national team, told TSN. “I think we’ve maximized as much as we could, the last year we’ve had, and the time we haven’t had together we made sure we had an impact every single day.”

Canada has held two camps this year, in January and March, and will have one more evaluation camp this month before the final roster is announced.

This last camp will also allow Kingsbury to assess Canada’s collegiate players, who haven’t been able to train with the national team due to commitments to their NCAA squads. The lone exception is Sarah Fillier, whose season with Princeton was cancelled.

It has been a trying year for Kingsbury and the national team. The pandemic kept the Canadian squad from training together on the ice for almost all of 2020.

“We’ve done everything that we could with whatever situation we were under,” said Kingsbury. “We did a lot of virtual work with our group throughout the last year. Our players, our athletes, were absolutely committed to doing whatever it took to be ready and prepared for whenever this opportunity came about. The work they’ve done in the hubs and at home individually is really a testament to the type of character we have on our team, on our roster.”

The upcoming tournament is also a crucial litmus test for the 2022 Olympics. Shortly after the women’s worlds, Kingsbury will select the 28 players who will be centralized in Calgary this fall to train for the Beijing Games.

“It’s the last opportunity we’ll get to see our athletes before making the big decision on who gets centralized…. This world championship will be the last opportunity to showcase themselves and what they can bring to our program,” she said. “This world championship means a lot at a lot of different levels, and certainly from a program perspective, this one’s a big one.”

Kingsbury enjoyed a 10-year career as a player with Canada before retiring in 2010. She’s now in her third year as director after taking over from Melody Davidson in 2018, who left Hockey Canada after 26 years with the organization in roles as head coach, assistant coach, general manager and head scout.

Kingsbury’s role in selecting the team is complicated by the lack of competitive games. Most of the Canadian players are part of the Professional Women’s Hockey Players Association, an organization that was formed in 2019 with the goal of implementing a viable pro women’s hockey league in North America.

While some PWHPA showcase games have taken place south of the border, the Canadian players in the PWHPA hubs in Toronto, Montreal and Calgary have not been able to compete due to government restrictions, leaving Canada’s collegiate players as the only ones with competitive games under their belts in the past year.

“It’s definitely a challenge,” Kingsbury said about player evaluation.  “We’ve done a lot of deep dives into player identity and what we have to work with. We’ve looked at the past quad and previous performances and really tried to analyze those carefully.

“We’ve done a lot of online scouting with our NCAA players to see what they can possibly bring to the table. Again, this selection camp coming up prior to the worlds will be obviously heavily weighted in the decision-making and seeing who is ready right now to perform and to give us the bests odds of winning a world championship.”

Several Europeans leagues have been able to hold their 2020-21 seasons. On paper, that gives a competitive advantage to usual underdogs like Finland, Russia and Switzerland, but Kingsbury doesn’t believe that Canada has the excuse not to be game-ready.

“I think all the countries are in the same boat as us,” she said. “I think it’s whoever managed the past year as best as they possibly could. I think we did a great job at that.”

Kingsbury won two Olympic gold medals as a player, along with three world titles, so she knows what it takes to form a championship team and end Canada’s nine-year gold-medal drought at the women’s worlds.

“Trust me, it’s not a lack of hunger that’s missing in our group. I think we’re in a good position right now. We have to look ahead and try to change that dialogue and get back to where we belong,