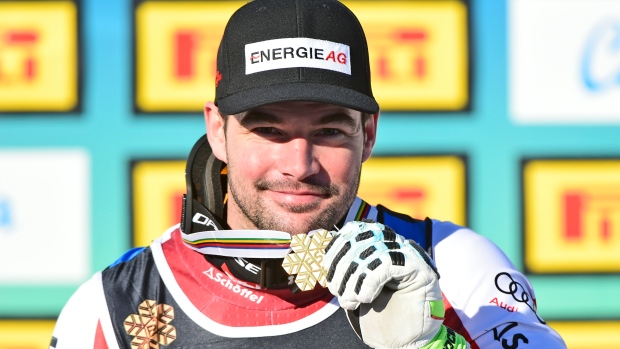 The top three faced some anxious moments when the unheralded Canadian came down as a late starter.

Wearing bib No. 28, the native of North Vancouver, B.C., was only a few tenths off the lead throughout his run and finished 0.42 behind winner Vincent Kriechmayr of Austria.

Seger returned to the World Cup circuit just last week after being sidelined for a month with a shoulder injury.

"I'm incredibly fired up right now. This has been such a strange and difficult season dealing with my first real injury ever when I felt like my skiing was in a really good spot," Seger said after his race. "Going through my first surgery and first rehab. Pushing as hard as I could to get back for this event.

"I am just so thankful for everyone who helped me get back to good health."

Jack Crawford of Toronto was 14th and Jeff Read of Canmore, Alta., was 18th, both career-best performances at the worlds.

Kriechmayr overcame a tricky course and high expectations to win.

Starting fifth on a course never featured on the men’s World Cup circuit, the Austrian mastered the difficult Canalone passage about 20 seconds into his run, where the first three starters all missed a gate and skied out.

Beating Germany's Romed Baumann and Pinturault, who took silver and bronze respectively, Kriechmayr confirmed his status as one of the race favourites. He won the last two super-Gs on the World Cup circuit and leads the season discipline standings.

Many racers after him choose a similar race line approaching the Canalone, but no one matched Kriechmayr’s pace on the rest of the course. Only 34 of the 56 starters made it to the finish.

He didn't expect his lead to hold up.

“I watched the guys before me with bibs 1, 2, 3, and they all missed that gate,” Kriechmayer said. “It rather felt like I had reduced my speed too much.”

He recently struggled with being labeled a favourite going into races. In Kitzbühel, he was seen fuming in the finish area after posting the fastest time in the last training session before the classic downhill race. He didn't want to be burdened by expectations of winning.

He finished the next race in 17th, but gradually began to embrace pressure and won back-to-back super-Gs.

Of the first men's race at the worlds, he said: “A really tough race for me. It was not always perfect but today it was really tough. Nice to start the championships this way.”

The victory completed Kriechmayr’s medal set, after he won silver in super-G and bronze in downhill at the worlds two years ago in Are, Sweden.

Baumann came closest to spoiling his day. Starting 20th, Baumann trailed Kriechmayr by more than six-tenths of a second early in his run but made up time at every split before finishing just seven-hundredths behind.

Baumann, who turned 35 last month, had a single podium in 69 career World Cup super-G starts — at Lake Louise in November 2010 — and had not been on any podium for six years.

Baumann is also Austrian but has been competing for the German ski federation since 2019, when he lost his place in the Austria team.

Winning silver, however, didn’t feel like payback against the Austrians.

Baumann described his medal-winning run as “an incredible story. I started the super-G season with start No. 54 in Val d’Isère.”

Baumann became the first skier to win medals at the worlds representing two different countries, after he took bronze in the combined event of the 2013 worlds in Austria.

Conditions were sunny but windy after all events on the opening three days were postponed because of bad weather.

"So far, so good," Seger said. "I mean it was a strange first couple of days dealing with weather but we knew it was supposed to get colder and it was looking like we'd get some good weather."