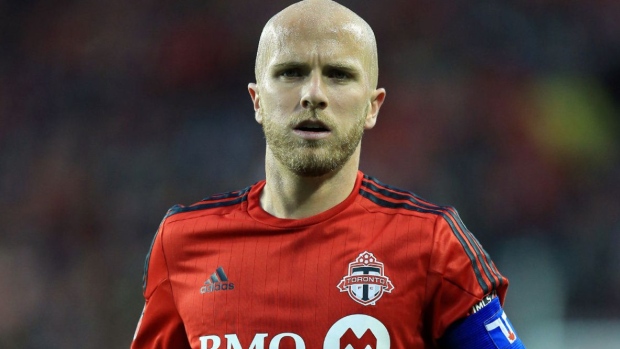 1. Is this Michael Bradley’s final home game for Toronto FC?

With his contract expiring at the end of the 2019 season skipper Michael Bradley could be playing his final home game at BMO Field this Sunday as Toronto FC close out the regular season against Columbus Crew. TFC could still claim a home game during the playoffs but currently look more likely to start the postseason on the road. With no solution reached over his future with the club there is a chance it will be the last time Bradley leads out this team at the stadium where he once lifted MLS Cup. Bradley will likely be playing at BMO Field on Oct. 15 as a member of the visiting team when Canada hosts Gregg Berhalter’s U.S. side in Concacaf Nations League action. Time will tell if that dressing room becomes something regular for the 32-year-old in 2020 and beyond.

2. TFC gets final chance to gain momentum heading into the playoffs

Games have come thick and fast for Greg Vanney’s team in the past month and Sunday’s regular-season finale against Columbus Crew will be their eighth game in the past 30 days. TFC has remained unbeaten in Major League Soccer and narrowly lost a Canadian Championship on penalties to Montreal Impact during the run, but the club has also struggled to get a run of victories, having last won back-to-back games in July. Vanney has been encouraged by some of his team’s performances, like away games against New England Revolution, FC Cincinnati and LA FC, but aside from the 5-1 thrashing of the Ohio expansion side, the other two games saw the club play well without claiming all three points. That’s a trend they are hoping to end on Sunday.

3. Can Jozy Altidore find another streak to boost TFC?

With seven goals in 12 MLS playoff appearances for the club and 11 goals in 18 games against rivals Montreal Impact, Jozy Altidore has established a reputation for delivering for TFC when the lights have been the brightest. Strikers don’t like long goalless streaks and the U.S. international ended his second longest run for Toronto in front of goal last weekend when he netted his first strike in 419 league minutes in their 2-2 tie at Chicago Fire. The relief and joy on Altidore’s face was clear to see after the goal. A player who already has four different streaks of goals in four or more consecutive games will be hoping he can continue his form in game 34 this Sunday and then carry it into the playoffs. 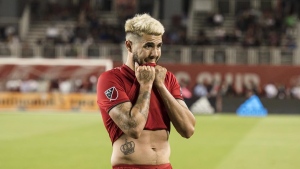 Toronto FC midfielder Alejandro Pozuelo has scored 11 goals this season and has 12 official assists. Those stats indicate a successful season for the designated player, particularly when you consider the Spaniard has been playing regular football for 14 months straight and has been involved in a remarkable 73 games during that time. Fatigue, though, has clearly played some part in his recent drop in form. As Vanney attempts to find the right balance to make his team harder to beat, Pozuelo has found himself moved out wide as an attacking winger in a 4-3-3. This has given him some freedom to find more space and make up more numbers centrally when the team is in possession, but the most important reason why he is there is that he can’t be trusted to work hard enough defensively. Vanney has a clear idea of how he wants his team to play as they head towards the playoffs, which means a man the club invested more than $25 million in over four years at the start of the season has been playing in an unfamiliar role. This could continue for the short term, but long term it’s something the club must figure out.

Former Toronto FC general manager Tim Bezbatchenko returns to face the club he guided to MLS glory back in 2017. Now the Columbus Crew president, Bezbatchenko brings his in-form club to BMO Field for their final game of 2019. The Crew struggled through the first half of the season and will miss the playoffs because of it, but come north encouraged by a run that has seen them lose just one game in the past 12 MLS matches dating back to the middle of July. It’s a run that has seen them defeat teams like New York Red Bulls, Atlanta United and the Philadelphia Union, who will all be playing for MLS Cup in the playoffs.

6. Montreal aiming to make an Impact in the playoff race 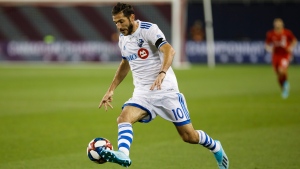 Despite losing 10 of their last 14 MLS league games, there have been real signs of encouragement for Wilmer Cabrera’s Montreal Impact of late. A Canadian Championship trophy was followed up by a terrific performance against Atlanta United last weekend. Although they were eliminated from playoff contention, there were positives to take away from the 1-1 tie with the defending MLS Champions. Talisman Ignacio Piatti has only started eight league games in 2019 because of injury, but now healthy he is blossoming alongside newly acquired Bojan Krkic. The attacking pair will look to inflict more damage on New York Red Bulls this Sunday, who arrive in Montreal hopeful of a win and to finish in the all-important fourth spot to give them a home playoff game.

7. Flipping the script in Hollywood

Bob Bradley’s LAFC have won just one of their last seven games, but have also lost just one as they end a record-setting regular season looking a little more vulnerable than they did two months ago. Comprehensive winners of the Supporters’ Shield for the league’s best regular-season record, they remain favourites to win MLS Cup and head into the final game of the regular season at home to Colorado Rapids knowing a win would give them 72 points, a mark that would surpass the regular season record of 71 set by New York Red Bulls in 2018.

With 31 goals and 15 assists in just 30 games, LAFC’s Carlos Vela has undoubtedly produced the finest individual season in MLS history. All that is left for the Mexican is one more goal that will see him pass Atlanta United’s Josef Martinez for the most goals scored in a single MLS season.

9. Whitecaps hoping to end 2019 on a positive note 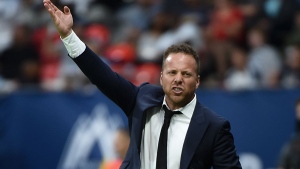 It has been a very poor season for the Vancouver Whitecaps. After being eliminated from playoff contention more than a month ago, head coach Marc Dos Santos challenged his players to see who wants to be back in 2020. Some have responded well, and the team has shown positive signs as an attacking unit during an unbeaten three-game streak that saw them score seven goals in three games, including four in a 4-3 thrilling victory at LA Galaxy last Sunday. They welcome another playoff team this weekend to BC Place as Real Salt Lake arrive hoping for three points and a finish in third or fourth in the final standings, which would help them secure a home playoff game.

Canadian goalkeeper Maxime Crepeau has had a remarkable campaign for the Whitecaps, one that started with him fighting for his place and ends with him being one of the league’s best in his position. The 25-year-old had to be patient to get his shot at this level.  After moving to the Whitecaps last winter, Crepeau recognized he needed to take the opportunity to beat Zac MacMath for the number one job and literally grabbed it with both hands. The former Montreal Impact academy product has been the club’s most consistent performer in 2019 on his way to being named the club’s player of the year. Arguably one of the best stories in Canadian soccer in 2019, Crepeau will get one more performance for the Whitecaps this season before heading to Toronto to join up with John Herdman’s Canada side.