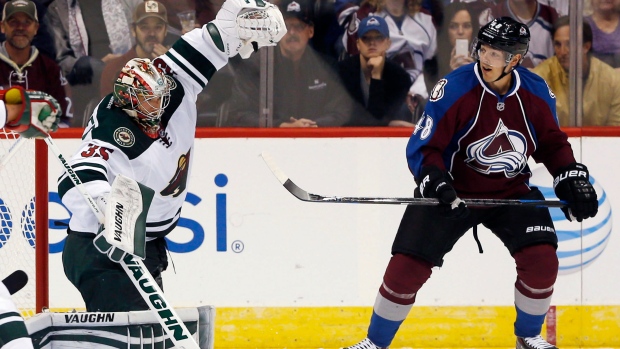 DENVER - Darcy Kuemper doesn't really want to be in net when the high-scoring Colorado Avalanche finally break out of their offensive funk.

The Minnesota Wild goalie will gladly take his second straight shutout of the Avalanche and leave town, not having to face them again until February.

Let some other goalie feel the wrath of a frustrated Colorado squad.

"That is a real good team," said Kuemper, who blanked Colorado 5-0 at home in the season opener on Thursday. "But we stuck in there. We weathered a lot of their storms."

Speaking of storms, fiery Colorado coach Patrick Roy didn't erupt over his inefficient offence, which has been bottled up by Kuemper through the first six periods of the season.

Quite the opposite. Roy applauded the play of Gabriel Landeskog & Co., saying they're on the verge of turning things around even though they've been outshot 82-46 so far this season.

"Honestly, I'm happy with our game," Roy said. "Not with the result, but happy with the performance of our team. ... We can build on that game."

Charlie Coyle added a goal and Zach Parise tapped in an empty-netter for the Wild.

The Avalanche were one of the top scoring teams in the league last season, but haven't been able to figure out Kuemper. He also shut out the Avalanche in Game 3 of their best-of-seven playoff series last season. The Wild advanced with an overtime win in the decisive game at the Pepsi Center.

Could Kuemper be in their heads?

"He played a solid game. What more can you say?" Landeskog said. "Like any goalie, we have to make it tough on him."

Zucker scored in the second period, his first goal since Jan. 16. He had surgery to fix a tendon in his quadriceps in March and missed the rest of the season.

Semyon Varlamov made 31 saves for the Avalanche as their struggles in the preseason have carried over into the regular season.

The Avs pulled Varlamov with 3 minutes remaining and when Matt Cooke drew an interference penalty with 2:33 left, they had a 6-on-4. Still, Colorado couldn't score.

Parise guided in a goal into an empty net with 3.3 seconds left.

Kuemper stopped everything shot in his vicinity. And even when he was out of position, the Avs couldn't capitalize, like when Tyson Barrie shot wide with Kuemper on the ground in the second period.

"The guys in front of me were unreal," Kuemper said. "There was a little more work today, but our structure was there and they allowed me to read the plays well. Our structure keeps the play real predictable. It allows me to play with confidence."

Down a goal heading into the second, the Avs tried to stir things up to get back into the game. Defenceman Erik Johnson went in for a hard check on Erik Haula and ended up delivering an elbow, sending Haula to the ice. Johnson was given a 5-minute major and a game misconduct for the hit.

Asked if he thought Johnson might face punishment by the league, Roy said, "I'd be very surprised."

Coyle thought he had his second goal of the game early in the second when he lifted a shot over Varlamov, who had Nino Niederreiter sprawled out on top of him. The goal was disallowed and the ruling upheld after a review.

Soon after, Zucker lined a slap shot under the glove of Varlamov to give the Wild a two-goal cushion.

Coyle got the Wild on the board before the capacity crowd even had time to settle into their seats when he redirected a shot past Varlamov.

Roy has tried different line combinations, trying to find an offensive spark. But nothing has seemed to work against Kuemper.

"I take it a shot at a time and stay even keel," Kuemper said.

NOTES: Minnesota had 2,500 fans show up to watch the game on the new screen at Xcel Energy Center. ... The Wild don't play again until Friday in Anaheim. ... The Wild are now 14-3-3 in their last 20 games in Denver. ... The only time Colorado was shut out last season was on March 21 against Boston. ... Colorado kicks off a four-game Eastern Conference road trip Monday in Boston.