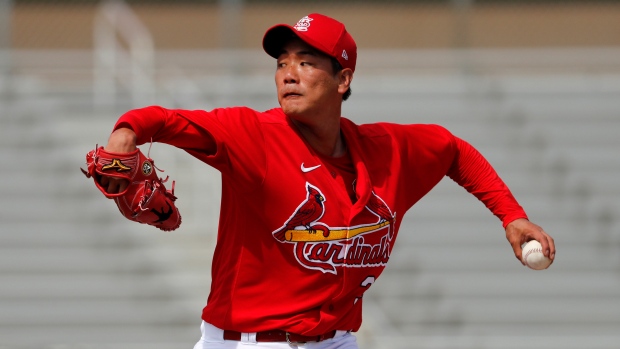 The 31-year-old left-hander retired all six Miami batters he faced in his first Grapefruit League start for the St. Louis Cardinals on Wednesday. It came after he threw one shutout inning of relief against the New York Mets on Saturday.

“I was nervous today compared to my first appearance, against the Mets,” Kim said through an interpreter. "I had a long time to prepare, so that made me kind of nervous.”

Kim struggled with control of his off-speed pitches in the first inning, but he found his rhythm in the second. He kept batters off balance mixing a fastball that touched 95 mph with his curve, eliciting some ugly swings and soft contact. The Marlins didn't get a ball out of the infield against Kim.

“Last time against the Mets, because it was my first appearance, they tried to be patient,” Kim said. “Because I was aggressive today, pounding the strike zone, they were aggressive too.”

Kim threw 18 of his 29 pitches for strikes, enjoying success against a lineup representative of what the Marlins could field on Opening Day.

He struck out Brian Anderson in the first inning. Jesus Aguilar and Isan Diaz whiffed in the second. All three went down swinging.

St. Louis signed Kim to a two-year, $8 million contract in December. He went 17-6 with a 2.51 ERA as a starter last season for the SK Wyverns, earning the award presented to the best pitcher in the Korean Baseball Organization.

The Cardinals aren't sure if Kim will be in their rotation or bullpen.

The opportunity to break camp as a starter grew more likely when the Cardinals halted Miles Mikolas' throwing program because of a flexor tendon issue. Mikolas received a platelet-rich plasma injection last week and will miss the first few weeks of the season.

Inserting Kim into their rotation would give the Cardinals something they didn't have last season – a regular left-handed starter. Rookie lefty Genesis Cabrera did make two spot starts last year. St. Louis hasn't used a full-time lefty starter since Jaime Garcia made 30 starts in 2016.

Miami rallied with four runs in the eighth to defeat the St. Louis split squad, improving the Marlins record to 5-0 this spring.

St. Louis scratched third baseman Matt Carpenter from the lineup because of back tightness. He's listed as day-to-day.