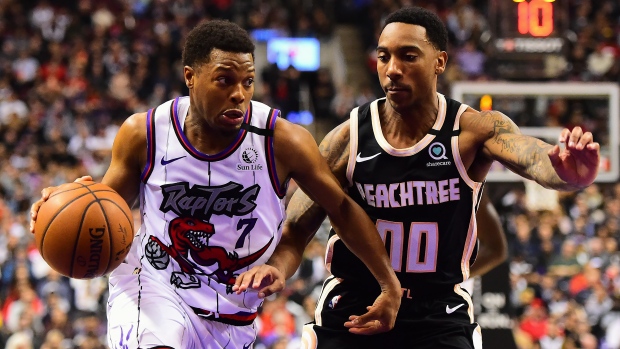 Kyle Lowry has surpassed Jose Calderon to become the Toronto Raptors' all-time leader in assists, with 3,771.

Lowry would pick up another assist later on in the fourth quarter to bring his total to 3,772. Toronto went on to beat the Atlanta Hawks 130-114 for their eighth win in a row.

Currently in his eighth season with the Raptors, Lowry is widely considered to be one of the best -- if not the best -- players in franchise history. Entering Tuesday's matchup, Lowry ranked third on the Raptors' all-time list in games played (532), fourth in points (9,324), first in three-point field goals (1,325) and first in wins shares (67.4).

Lowry has made five All-Star Teams, a 2015-16 All-NBA Team and won the first NBA championship of his career last summer.

A native of Philadelphia, Lowry is averaging 17.5 points per game to go along with 7.1 assists during his career as a Raptor.

Lowry was selected No. 24 overall by the Memphis Grizzlies in 2006 out of Villanova.