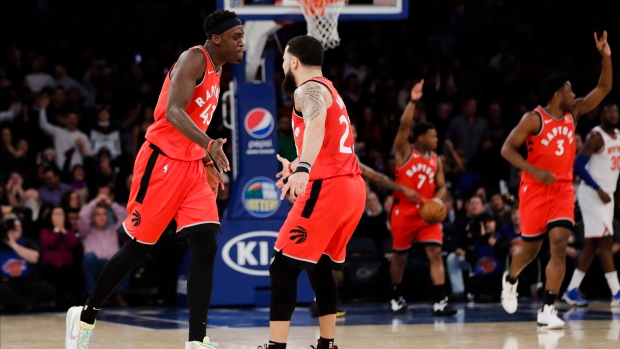 NEW YORK — On “Star Wars” night at Madison Square Garden, the Toronto Raptors showed why they remain a galaxy far, far away from the New York Knicks.

With All-Star players and big-game experience, the NBA champions have too many assets the Knicks simply lack.

“We’re just a team that, we are comfortable in every situation," point guard Kyle Lowry said. “We understand what to do and we’ve been here before."

Lowry scored 26 points, Pascal Siakam had 23 and the Raptors beat the Knicks 118-112 on Friday night for their sixth straight victory.

A night after being voted to start the All-Star Game, Siakam had two big baskets down the stretch. He drove for a dunk with 1:09 left and Toronto leading by only one, then nailed a 3-pointer with 21 seconds remaining after the Knicks had closed within three.

Fred VanVleet and Norman Powell each finished with 16 points for the Raptors, who beat the last-place Knicks for the eighth straight time.

“I think we’re battle-tested," Siakam said. “We are a team that has guys that understand what it takes to win and when everything is not going right, don’t panic and continue to play."

Marcus Morris and Damyean Dotson each scored 21 points for the Knicks, who have dropped five of six. Julius Randle had 20 points and 11 rebounds.

Along with performers dressed in “Star Wars” costumes, fans were treated to music and sound effects from the science fiction franchise. In another unusual sound for Madison Square Garden, a loud “Let's go Raptors! Let's go Raptors!” broke out in the fourth quarter.

And as usual, the Raptors fans left happy. Toronto has won 16 of the last 18 meetings, including four straight in New York.

But the Knicks made it tough, just as they did in recent losses to Philadelphia and the Lakers.

“Well, it’s tough because we competed the entire game," Morris said. “Definitely tough to keep losing like that."

New York had held its last three opponents to 100 points or fewer, but the Raptors have too much firepower to be held down too long. Even after a slow start, they weren't far off the 124.2 points they averaged in the first five games of their winning streak.

Lowry and VanVleet made 3s to open the second half and the lead grew to 67-55 when Siakam converted a three-point play, but the Knicks knocked half of it off by the end of the period and Toronto took an 85-79 lead to the fourth.

Raptors; Coach Nick Nurse said F Patrick McCaw, who left Toronto's victory over Philadelphia on Wednesday in the second quarter, had a broken nose. He said McCaw would be re-evaluated Saturday with hopes he could play in the next game Sunday. ... Toronto is 8-3 in January, clinching its 21st straight month with a winning record, dating to February 2017. That's the longest streak in franchise history and the longest current streak in the NBA.

Knicks: Rookie RJ Barrett missed his fourth straight game with a sprained right ankle, missing a chance to play against his hometown team. Interim coach Mike Miller said Barrett was set for another evaluation on his progress. ... Elfrid Payton had 13 points and 11 assists.

Siakam, the winner of last season's Most Improved Player award, was voted an All-Star starter despite missing 11 games with a groin strain. He came in averaging 23.5 points after scoring 16.9 per game last season, when he broke out in his third season.

“It’s a hell of a climb in a couple years and I think not only for him," Nurse said. “I’ve always said this repeatedly, he went to work on his game and he put in some serious time and had some great, I think, inner drive and at the same time handled all that was coming each time."

The Raptors coach has a chance to join Siakam at All-Star weekend in Chicago. While Frank Vogel and the Lakers staff have wrapped up the spot from the Western Conference and will coach Team LeBron, the spot from the East to lead Team Giannis is still up for grabs, with the deadline Feb. 2. Milwaukee coach Mike Budenholzer is ineligible after coaching last year, and Nurse, who is from Iowa, would like the opportunity.

“Yeah, Why not? It’s close to where I grew up, kind of my second city I grew up in, so yeah, for sure," Nurse said. “Tremendous honour I think, shows you’ve had a good start to the season if you can make it. I don’t think it probably comes around every year in your coaching life, so yeah, it’d be really cool."