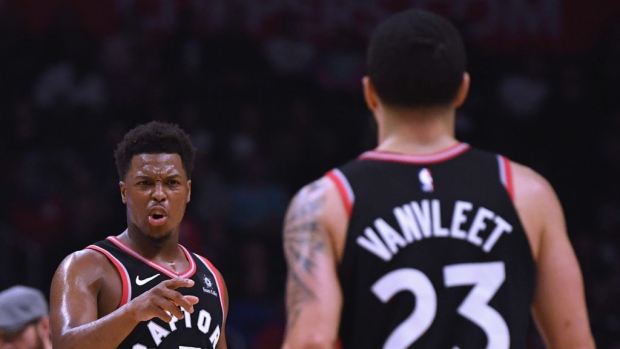 The shorthanded Toronto Raptors may be getting reinforcements for Saturday's game against the Cleveland Cavaliers.

Kyle Lowry has been upgraded to questionable after missing the team's past five games with a recurring foot infection. The 35-year-old is averaging 17.0 points, 5.4 rebounds, and 7.3 assists in 39 games this season.

Kyle Lowry (foot) has been upgraded to questionable for tomorrow's game in Cleveland, as has Rodney Hood (hip).

VanVleet (hip), Watson (protocols) and Harris (hip) are still out. Recently signed Freddie Gillespie is also listed as out for now, he still has to clear protocols.

Newly acquired Rodney Hood (hip) has also been upgraded to questionable after missing the past four games. Hood is averaging 5.5 points in 17.8 minutes in four games with the Raptors since being acquired from the Portland Trail Blazers as part of the Norman Powell trade.

Fred VanVleet will miss his fourth-straight game with a hip flexor. The 27-year-old was recently suspended one game for leaving the bench during the on-court altercation between OG Anunoby and Dennis Schroder in Tuesday's loss to the Los Angeles Lakers.

Paul Watson (COVID protocols), and Jalen Harris (hip) will also remain out for Saturday's game. Freddie Gillespie, who was recently inked to a 10-day contract, is also listed as out, as he has yet to clear protocols.

The Raptors (20-32) sit 11th in the Eastern Conference, 3.0 games back of the Chicago Bulls for the 10th seed, and the final spot in the play-in tournament.