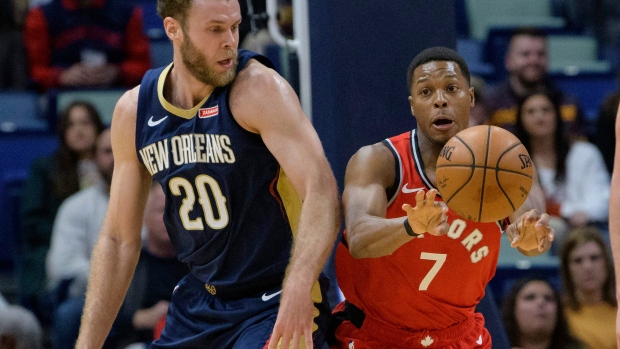 TORONTO — The Toronto Raptors say point guard Kyle Lowry and centre Serge Ibaka will be out indefinitely after both sustained injuries Friday night during a game against New Orleans.

The Raptors announced Saturday that Lowry will be re-evaluated in two weeks after sustaining a fracture in his left thumb during the first quarter of Toronto's 122-104 win over the Pelicans.

Ibaka is also out indefinitely with a sprained right ankle. He will undergo additional imaging in Los Angeles.

Toronto (6-2) play the Lakers in L.A. Sunday night, followed by a matchup against former teammate Kawhi Leonard and the Clippers on Monday.

Lowry is second on the team in points per game with 21.8, and second in assists with 6.5. Ibaka is fourth in points with 14 and fourth in rebounds at 6.5.

Lowry went to the bench after the initial injury Friday night, but returned a couple minutes later. He made two three-pointers in the second quarter before subbing out midway through the period and retreating to the locker room.

Lowry said after the game that the injury is unrelated to the surgery he had in July to repair ligaments in the same thumb.

Ibaka was in a walking boot after the game. He suffered his ankle sprain when he contested a layup by Brandon Ingram with about a minute remaining in the second quarter. Ibaka lay on the floor, writhing in pain as play continued, before a Toronto foul allowed two teammates to help him limp off the floor.