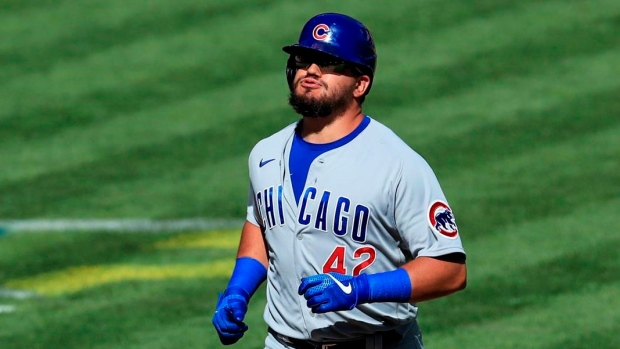 NEW YORK — Kyle Schwarber and Albert Almora Jr. were cut loose by the Chicago Cubs after helping the team win its first World Series title in more than a century, among a record 59 players who became free agents as part of the fallout from the coranavirus pandemic when their teams declined to offer them 2021 contracts by Wednesday night’s deadline.

Cincinnati reliever Archie Bradley, Atlanta outfielder Adam Duvall, Colorado outfielder David Dahl and Minnesota outfielder Eddie Rosario also were let go by their clubs, who did not want to allow those players to become eligible for salary arbitration in February, which would have been their right had they been tendered contracts.

The total cut was one more than the previous high at the tender deadline, ahead of the 2004 season.

Schwarber returned from a serious knee injury and hit .412 with two RBIs in the 2016 World Series as the Cubs won their first championship since 1908. He served as the designated hitter for games in Cleveland.

Almora made a key play in Game 7, running for Schwarber in the 10th inning, advancing on Kris Bryant’s fly ball and scoring the go-ahead run on Ben Zobrist’s double in an 8-7 victory.

Just 137 players remained eligible to exchange salary arbitration numbers with their teams on Jan. 15, down from 155 on the eve of the deadline last January.

While the total number of players let go at the deadline was up only a bit from 56 last year, more high-quality players were set free by teams, many trying to cut expenses after a regular season that included a sharp revenue drop because no fans were allowed in stadiums due to health conditions.

Milwaukee was on the verge of cutting hard-throwing reliever Corey Knebel but instead traded the right-hander to the World Series champion Los Angeles Dodgers for a player to be named or cash just ahead of the deadline. Knebel was an All-Star in 2017 with 39 saves and 126 strikeouts in 76 innings but missed 2019 following Tommy John surgery and struck out 15 in 13 1/3 innings in the pandemic-shortened season as his average fastball velocity dropped 3 mph to just under 95 mph.

Fifty-nine players agreed to one-year contracts ahead of the deadline, many of them facing a threat of being cut.

The New York Mets agreed to a $5.2 million, one-year deal with left-hander Steven Matz and finalized their $15.5 million, two-year contract with free-agent reliever Trevor May, a deal that had been pending a physical. The Mets allowed pitchers Chasen Shreve, Nick Tropeano, Paul Sewald and Ariel Jurado to go free; Tropeano was claimed off waivers from Pittsburgh in October, before owner Steve Cohen bought the team from the Wilpon and Katz families.