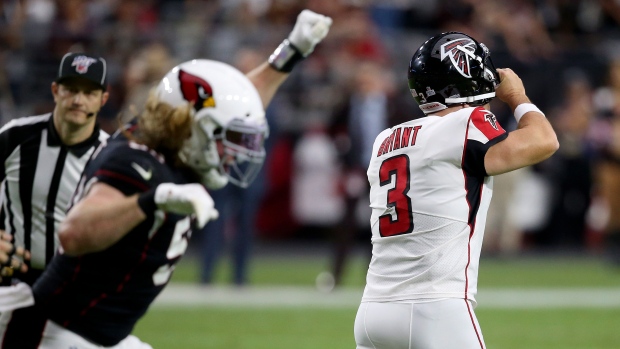 The Cardinals coach was too busy trying to figure out what his offence was going to run during the minute and 53 seconds left in the game.

The way it worked out, Kingsbury could have relaxed.

Bryant missed the extra point, and Arizona escaped with a 34-33 win over the Falcons on Sunday behind Kyler Murray's 340 yards passing and three touchdowns.

"That's the way it goes sometimes," Arizona receiver Larry Fitzgerald said. "I feel like today we had some things that went our way."

Fitzgerald was talking about several close calls that went in favour of the Cardinals, who have now won two straight games.

Damiere Byrd looked like he might have fumbled after a 58-yard catch, but the call was upheld after a review. Murray ran for a first down on the game's final drive on a play that was close to being short of the marker, but that review was also confirmed.

Even with those advantages, Atlanta could have tied the game with 1:53 left after Matt Ryan hit Devonta Freeman on a 12-yard touchdown pass. But the 44-year-old Bryant missed left on the extra point, and the Cardinals ran out the clock from there.

Ryan — who threw for 356 yards and four touchdowns — didn't blame his kicker. The Falcons erased a 17-point deficit in the second half.

"These kinds of games never come down to one play," Ryan said. "Everybody in the locker room can look at four or five things they did throughout the game that we could have done better, that we would have been in a different situation at the end of the game."

The Cardinals (2-3-1) took a 34-27 lead with 5:12 remaining on David Johnson's 14-yard touchdown catch from Murray. Johnson made a great adjustment to his route on the slightly underthrown ball, catching the ball between two defenders.

The Cardinals won at home for the first time since last Oct. 28.

"It's been a while," Fitzgerald said. "Nice to get back on the right track."

After showing flashes during the season's first five games, Arizona's offence put together the complete performance it expected after bringing in coach Kliff Kingsbury and Murray during the off-season.

"Guys are understanding what we can be if we play together as a team and hopefully we can take it into next week," Kingsbury said.

The way this one ended was a stunner. Bryant had missed just three extra points over the past 11 seasons before Sunday. After the miss, the kicker took off his helmet and walked off the field with his head down.

"The only thing that matters is how the game ends," Bryant said. "I have gotten a lot of support but it doesn't take away from the feelings of being depended on to do my job and coming up short."

Arizona scored on a 20-yard touchdown from Murray to Maxx Williams early in the third quarter to take a 27-10 lead and looked like it might turn the game into a blowout.

The Cardinals were productive on offence in the first half and this time had some success in the red zone, which was a problem in previous games. Chase Edmonds scored on a 2-yard pass from Murray and Johnson ran for a 1-yard score as Arizona built a 20-10 halftime lead.

Murray showed off his arm strength and touch on a few big plays, including the 58-yard pass over the middle to Byrd and a 38-yard completion to Trent Sherfield down the left sideline.

Atlanta was trying to bounce back after a 53-32 loss at Houston last week. The Falcons stayed on the road, flying directly to Phoenix and practicing for a week in the desert before Sunday.

Atlanta jumped to a 7-0 lead early on Ryan's 9-yard pass to Calvin Ridley that capped a 10-play, 80-yard drive, but the Falcons managed just 50 yards the rest of the first half.

Ryan completed 30 of 36 passes and the Falcons slightly outgained the Cardinals with 444 total yards.

Arizona's Chandler Jones had arguably the biggest defensive play of the game when he sacked Ryan and forced a fumble in the fourth quarter. The Falcons recovered, but the play forced a punt and stopped Atlanta's momentum.

Murray is the first NFL quarterback to have at least 20 completions in his first six career games.

The Falcons return home to face the Los Angeles Rams next Sunday.

The Cardinals travel to face the New York Giants next Sunday.