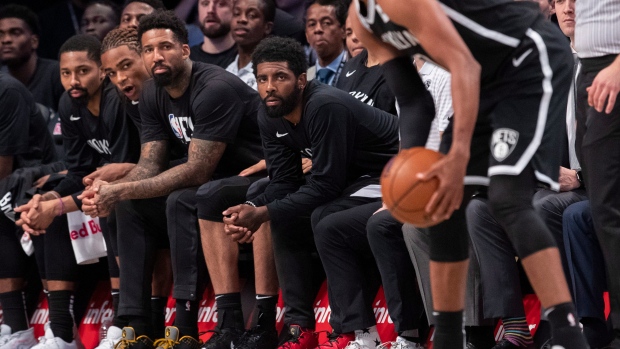 Kyrie Irving and the Brooklyn Nets , The Canadian Press

SHANGHAI — Brooklyn guard Kyrie Irving left the team's preseason game against the Los Angeles Lakers about one minute after tip-off after taking a hit to the face.

Irving was attempting to play through a facial fracture, an injury that occurred in a pickup game last month. He was wearing a clear mask in an effort to protect his face, but appeared to bump into Lakers guard Rajon Rondo while playing defence just 1:06 into the contest.

Irving's face made contact with Rondo's upper arm. The Nets guard immediately winced in pain, took the mask off and motioned to the bench that he needed a substitute.

The Nets said Irving would not return to the game.