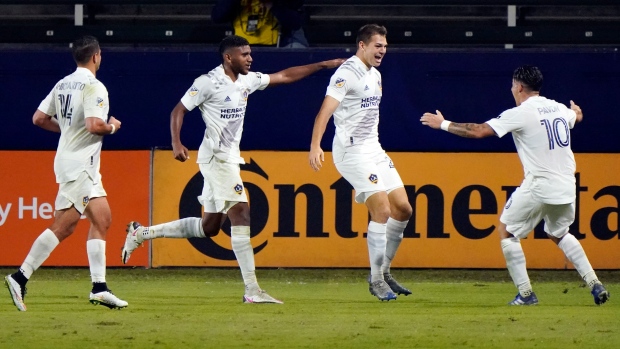 Kai Koreniuk — who came off the bench just four minutes before — smashed in a ball from Cristian Pavon in second-half stoppage time to give the Galaxy their first win since Sept. 6.

Goalkeeper Evan Bush had been a force in the Whitecaps (7-12-0) net until the late goal Sunday, stopping four-of-five on-target shots.

At the other end of the park, Jonathan Klinsman made five saves for the Galaxy (5-9-3).

Sunday marked the Whitecaps’ fifth game in 16 days and the team appeared tired at times in the matchup with L.A.

Despite the fatigue, Vancouver controlled 54.6 of the possession and put five shots on target.

One of Vancouver’s best chances of the night came in the 53rd minute when striker Lucas Cavallini got a header off of a pass from Fredy Montero.

Klinsman got a small piece of the shot but the ball bounced and had to be picked off the line by an L.A. defender before the offside whistle sounded.

Vancouver started strong, hemming the Galaxy into their own end for extended portions.

But the visitors' energy began to wane towards the end of the first 45 minutes and L.A. took advantage of the opportunity to apply its own pressure.

The Galaxy got a free kick in the 38th minute after Yony Gonzalez was taken out by Vancouver's Leonard Owusu.

Efrain Alvarez got the ball to Sebastian Lleget who fired a blistering shot at the 'Caps net. Bush made the stop but couldn't contain the rebound. Lleget sent a second chance into the Vancouver goal but was called offside.

Bush had to be sharp from the get go Sunday. He was tested in the sixth minute after Vancouver Jake Nerwinski fumbled a header midfield, allowing Galaxy sharpshooter Pavon to get the ball.

Pavon went one-on-one with Bush and the 'Caps netminder made a diving, fingertip stop, then quickly bounced back up to make a second save.

The Whitecaps best opportunity of the first half came in the 15th minute off a corner from midfielder Michael Baldisimo.

The incoming ball was blocked but not cleared, bouncing to Vancouver's Ali Adnan, who launched a long rocket just wide of the L.A. net.

The Whitecaps will now get a few days off before hosting the San Jose Earthquakes at their temporary home in Portland on Saturday.

NOTES: L.A.'s Perry Kitchen was shown the yellow card in first-half injury time after he bowled over Vancouver's Lucas Cavallini. He will miss next Saturday's game against Los Angeles FC as he serves a suspension for yellow-card accumulation. … The Whitecaps finalized the transfer of Serbian centre back Ranko Veselinovic on Sunday, signing the 21-year-old through 2023. Veselinovic originally joined Vancouver on loan from FK Vojvodina in the Serbian SuperLiga in February.

This report by The Canadian Press was first published Oct. 18, 2020.