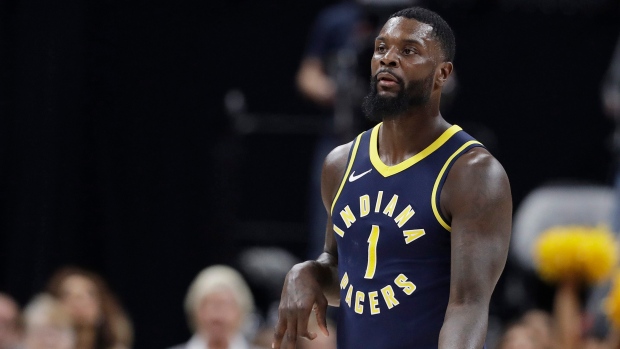 When James called Stephenson last week to pitch him on teaming up with the Los Angeles Lakers, Stephenson's feelings were confirmed — and he quickly accepted the invitation.

Coming off a productive season in his latest stint with the Indiana Pacers, Stephenson agreed to a one-year, $4.5 million deal to join James, McGee and Rajon Rondo in the Lakers' influx of veteran talent.

Stephenson has been one of James' most famed antagonists during their careers, and even Stephenson is surprised they've become teammates. But it only took a phone call from LeBron to persuade Stephenson to join the Lakers.

"I was actually surprised he made the move to LA," Stephenson said. "I guess he needed a new look, and I just feel like him reaching out and showing he likes what I bring to the game, it's amazing. I'm just happy to be on a team that wants to win."

Stephenson and James competed fiercely in the Eastern Conference over the years, with Stephenson applying tough defence and creative tactics to the four-time NBA Most Valuable Player. Stephenson created multiple memes during the 2014 East finals between the Pacers and James' Miami Heat by blowing in James' ear and making a famously exaggerated flop.

"It's actually funny that I'm actually on the same team as him," Stephenson said. "I'm very excited to see what that brings. Just playing with him, one of the best players in the game, I can't wait to get on board with him and have a fun season this year."

Stephenson appeared in all 82 games for Indiana last season, averaging 9.2 points, 5.2 rebounds and 2.9 assists per game. The Lakers are his seventh NBA franchise entering his ninth season.

Stephenson is eager to run with the up-tempo Lakers and their young core, including Brandon Ingram and Lonzo Ball.

"It's going to be amazing," Stephenson said. "Especially playing with the talent I'm playing with, the high tempo, just playing without thinking too much and playing in the flow of the game and having fun at the same time, a team that run and guns, that's basically how I love to play."

McGee joins the Lakers from the Golden State Warriors, where he won his second straight NBA championship ring. The 7-foot veteran could be the starting centre for the Lakers, who have only young big men Moe Wagner and Ivica Zubac under contract after allowing Brook Lopez to leave.

"JaVale changes the geometry of the game," general manager Rob Pelinka said. "His unique combination of incredible length and foot nimbleness will allow us to play fast at both ends. His ability to both protect the rim and create angles with rim rolls will present a number of advantages in coach (Luke) Walton's system."

The Lakers chose Mykhailiuk with the 47th overall pick in last month's draft. The Ukrainian shooter averaged 14.6 points, 3.9 rebounds and 2.7 assists per game for Kansas last season while setting the Jayhawks' single-season record with 115 3-pointers.

Mykhailiuk has been impressive early in Las Vegas summer league play, and the Lakers decided they didn't need to wait to sign him later in the off-season.