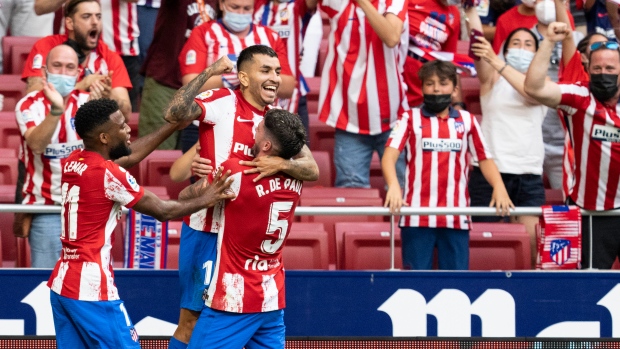 What’s been going on in LaLiga this past week? Here are 10 of the top stories, from the second round of matches of the new season to all the latest transfers.

Matchday 2 of the 2021/22 LaLiga Santander season was as dramatic as they come; new signings continue to flow into LaLiga; and a number of high-profile contract renewals were finalised this week. Here’s all you need to know from across LaLiga this week.

The champions are top

It may only be the second week of the season, but reigning champions Atlético de Madrid are back in the position where they finished last season. Los Rojiblancos are the only side with six points from a possible six so far this season, defeating RC Celta and

Barcelona and Real Madrid both dropped their first points of the new campaign in Matchday 2, doing so away at Athletic Club and Levante respectively. Both matches were thrilling draws: Memphis Depay scored his first official Barça goal to earn his team a 1-1 draw and Vinícius scored twice as Real Madrid fought back for a 3-3 final score.

The race to win the Pichichi trophy for LaLiga Santander’s top scorer is already hotting up, with Real Madrid’s Vinícius and Atleti’s Ángel Correa currently leading the way with three goals each. They have started the season brilliantly, scoring in both of their matches so far.

Rafa Mir is back in LaLiga

Sevilla have won the race to sign Rafa Mir, with the in-demand Spanish striker joining from Wolves. He played on loan at SD Huesca last season and is now back in Spain’s top tier, ready to help Sevilla in their title challenge. After scoring 13 LaLiga Santander goals last term and after impressing for Spain at the Olympics, there is great excitement about the 24-year-old’s arrival.

Benzema extends his deal until 2023

Karim Benzema will be leading Real Madrid’s attacking line for at least two more years, with the striker having agreed a contract extension with Los Blancos. His deal was set to expire at the end of this season, but Real Madrid have ensured they’ll be banking on the forward who joined in 2009 for a couple years more.

Villarreal wrap up their second most expensive signing ever

Villarreal showed last season that they can compete with anyone, but they’re not resting on their laurels and have completed some quality signings this summer. The latest is the acquisition of winger Arnaut Danjuma from AFC Bournemouth, with the Netherlands international becoming the Yellow Submarine’s second most expensive signing ever, only behind that of Paco Alcácer.

Granada were pursuing Sporting CP’s Luís Maximiano for several weeks and they finally have their man. One of the top objectives at the Estadio Nuevo Los Cármenes was to bring in a new goalkeeper this summer and Maximiano is one of the top young shot-stoppers in Europe.

Pezzella and Real Betis are back together again

Centre-back Germán Pezzella is back in LaLiga Santander with Real Betis. The Argentine returns to bolster the defensive line for los Verdiblancos, whom he represented between 2015 and 2017, after a stint in Italy with Fiorentina.

Marcos Llorente was one of Atlético de Madrid’s best and most important players in their title-winning campaign last year. The champions have now tied the versatile Spaniard down for the long term by agreeing a contract extension until 2027, following in the steps of other key players such as Stefan Savic and Jose Maria Gimenez.

Elche completed an eye-catching signing this week, bringing Argentine forward Darío Benedetto to the club. The former Club América and Boca Juniors striker already knows what it’s like to score in Spain, having netted in the 2018 Copa Libertadores final between Boca and River Plate at the Bernabéu. Now he’ll look to put his name on the scoreboards of several more Spanish grounds.