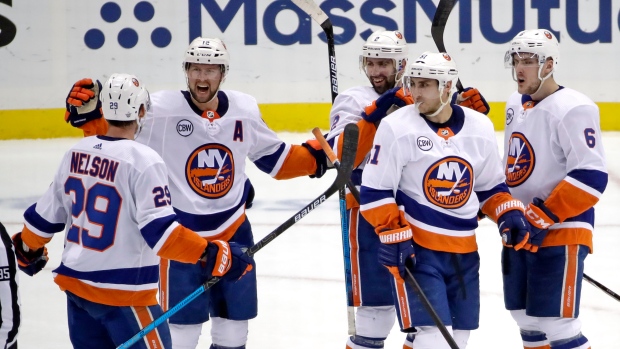 NEW YORK — Lou Lamoriello and Barry Trotz say they didn't know exactly what to expect from the New York Islanders this season.

There were plenty of questions after the Islanders gave up 293 goals — the most in the NHL since 2006-07 — while missing the playoffs for the eighth time in 11 years. There was uncertainty on offence when star centre John Tavares left in free agency for his hometown Toronto Maple Leafs.

"There were a lot of unknowns. We had no preconceived notions," Lamoriello said. "Whatever expectations there were, there were really none one way or another."

The answers have come in the form of a stunning one-year turnaround that has the Islanders in the second round of the playoffs. New York gave up a league-low 191 goals, charged to the top of the Metropolitan Division and just swept the star-laden Pittsburgh Penguins in the first round.

Knowing some had picked them to miss the playoff again, players just shrug it off.

"That's kind of been a little bit of the story line here and we're used to it," said Anders Lee, who succeeded Tavares as team captain. "That's just the way it's been, not just this year, it's kind of always been that way. This year we've really taken it on and run with it."

Both Lamoriello and Trotz say they knew they were going to give up fewer goals with a better defensive approach.

"We wanted to play a certain way," Trotz said. "We knew we could fix the goals against, that's commitment and that's work ethic, detail and structure."

The 76-year-old Lamoriello, whose long career includes building the New Jersey Devils into an NHL power a generation ago, vowed to bring a culture change to the Islanders when he took over as the president of hockey operations last May. A few weeks later, he fired general manager Garth Snow and coach Doug Weight.

Trotz was hired as coach in June, days after he led Washington to its first Stanley Cup championship and then abruptly resigned in a contract dispute. The hiring was celebrated by the Islanders' rabid fan base, which has seen just one post-season series win since 1993 — a far cry from the glory days of winning four championships in a row.

After losing Tavares, Lamoriello went about filling the roster with players with winning experience. Veterans like Leo Komarov, 32, and Valtteri Filppula, 35, were brought in to help the development of youngsters like Anthony Beauvilier. And 27-year-old Tom Kuhnhackl, who won two Stanley Cups with the Penguins, was also a solid addition.

"We were looking for good people, the people who have won," Trotz said. "That's so important for our growth as an organization and a group coming in. We looked for character people and Lou did a great job."

"It's helped us all along," said forward Josh Bailey, now the longest-tenured Islander in his 11th season with the team. "It's a big part of our identity and I think the more results we've seen as the season went on, the more belief (it fostered) in one another and what we were doing, and trust in our staff and everyone."

A big question in the off-seasoncentred on goaltending after Robin Lehner was signed to pair with Thomas Greiss. Lehner was with Buffalo the previous season and left a game down the stretch because of a panic attack and was subsequently treated for alcohol and drug addiction and also diagnosed with bipolar disorder, ADHD and PTSD. He talked openly about his personal life when he joined the Islanders, and credited the organization and his new teammates with giving him support.

Greiss and Lehner were solid all season. Greiss went 23-14-2 with a 2.28 goals-against average and five shutouts while Lehner was 25-13-5 with a 2.13 GAA and six shutouts. The two shared the William Jennings Trophy for the team allowing the fewest goals in the league. Lehner started all four games in the series against the Penguins, limiting them to six goals on 136 shots, and is a finalist for the Vezina Trophy.

The focus on defence has meant playing with more discipline. And while a few players enjoyed boosts in their offensive production, it meant reductions for others, including Mathew Barzal, Lee, Bailey and Jordan Eberle. The sacrifices have resulted in more overall success.

"We play as a team," Trotz said. "I think everybody has given up a part of themselves to be a part of something greater."

The coach points to a road trip in December that became a springboard for the rest of the season. They had lost five of the previous nine after the Thanksgiving weekend, and then won three of four, shutting down high-scoring lines for Colorado and Dallas.

"I think from that point we really trusted our game," Trotz said. "We were sort of in-between a little bit and that sort of galvanized the group."

In the second game after Christmas, the Islanders went to Toronto and shut out the Maple Leafs 5-0 in their first game playing against Tavares. It was part of a stretch in which the Islanders went 16-2-3 from Dec. 8 to Feb. 2 to jump to the top of the division.

"I came into this team and talked to the guys straight in the summer and a lot of the guys said 'We're going to go far,'" Lehner said. "That just grew during the season when the system started to jell and we started playing together."

They Islanders say they're not simply satisfied with just getting to the second round, where they will face either Carolina or Trotz's former team, the Capitals.

"We're nowhere near where we want to be at," Bailey said. "You have to win four (series) to win it all."