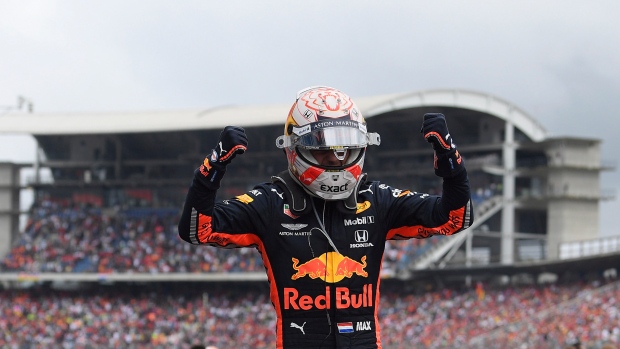 Verstappen mastered Sunday's treacherous conditions on a rain-soaked track to seal a second win in three races, and seventh of a career which appears destined to take the ice-cool Dutchman to the top of Formula One before too long.

Verstappen raised his fist triumphantly as he took the checkered flag at the Hockenheimring, finishing ahead of Ferrari's Sebastian Vettel and Toro Rosso's Daniil Kvyat. A jubilant Red Bull team principal Christian Horner described his driving as a "masterclass."

While Verstappen's long-term future looks as dazzling as the orange jerseys of the devoted Dutch masses following their national hero, he is not yet a championship contender.

Although that's more to do with his car than with him.

Victory moved Verstappen to within 22 points of Mercedes driver Valtteri Bottas overall, but Lewis Hamilton is 63 points ahead of Verstappen after 11 of 21 races. A rare blip from Mercedes, concerning both Bottas and Hamilton, happens as rarely as the 41 Celsius (106 F) heat which turned Hockenheim into a furnace on Friday.

Hamilton finished 11th after starting from pole position, while Bottas crashed near the end failing to overtake Lance Stroll of Montreal.

However, Hamilton improved to ninth place — earning two points — after stewards handed time penalties to Alfa Romeo drivers Kimi Raikkonen and Antonio Giovinazzi, who were demoted from seventh and eighth to 12th and 13th respectively for an issue relating to their clutches at the start.

"They're still miles ahead in the championship. It's still quite a lot, isn't it? More than two victories," Verstappen said of Mercedes. "(But) we want to close that gap and fight for victory at every single race."

Verstappen has four podiums in 11 races and has been outside the top four positions only once — proof of his consistency but also that Red Bull lacks outright speed to challenge Mercedes every race.

Still, this was an imperious performance from Verstappen, who simply thrives in the rain. He credits his father Jos Verstappen — a modest F1 driver — with helping him develop the skills required.

"A lot of practice from when I was young, in the wet, working many hours with my dad - who was also pretty decent in the wet," Verstappen said. "He provided tips. It's also about making decisions in the wet, not just driving but noticing what is going on around you."

Wet weather caused havoc as drivers took up to six pit stops for new tires and several crashed on a section of notoriously slippery tarmac.

Ferrari driver Charles Leclerc was in contention for a podium, despite starting from 10th, but switched for quicker tires and slid off the track there, going over the gravel and into the barriers.

Remarkably, Hamilton had the same mishap there moments later, mangling his front wing. He came in for a new wing and tires, but it took Mercedes by surprise and a painfully long stop cost him any chance of victory.

For Vettel it was a remarkable turnaround, and almost the opposite to last year — when he crashed near the end after leading the race from pole position and Hamilton won, having qualified only 14th.

The red-clothed Ferrari mechanics and engineers mobbed the four-time F1 champion, doubtless relieved after the team's botched qualifying on Saturday. Vettel could not even set a time and Leclerc's qualifying bid was undone late in the session, forcing him to start 10th.

"Starting last, we can certainly be very happy recovering," said Vettel, who is fourth in the standings, 21 points behind Verstappen heading to next weekend's race in Hungary. "We are making mistakes and we're not where we want to be, but we need to keep believing in ourselves and I think our day will come."

It was his third career podium and, above all, a point proved. The 25-year-old Russian driver was ruthlessly replaced at Red Bull by Verstappen after just four races of the 2016 season, and could not even get a seat in F1 last year.

The race was crazy," he said. "Incredible roller-coaster, like my whole career."

With the track drenched, a safety car was deployed.

Just two laps into the race, the safety car came out again when Sergio Perez clipped a wall. He was one of 20 drivers who failed to finish.

Late on in the race, an exasperated Hamilton, who said he had been fighting illness, lagged in 14th spot.

"How's it got this bad?" he asked his team over race radio.

Although the five-time F1 champion gained places back, he almost did not finish the race at all, somehow regaining control after spinning at full speed with 10 laps left.

Still, the extra two points moved him 41 points ahead of second-place Bottas.

Bottas will hardly have done himself any favours as he bids to earn a new contract with Mercedes for next year.

"I'm very disappointed," he said. "Unfortunately I made a mistake which lost us a lot of points."

Vettel got past Stroll and then Kvyat smoothly to seal a remarkable podium finish in a thrilling race.

Since Hamilton's uneventful win from pole at the French GP last month, fans have had three excellent races: Austria, Britain and now here.

In terms of unpredictability and sheer glued-to-the screen drama, this was No. 1.