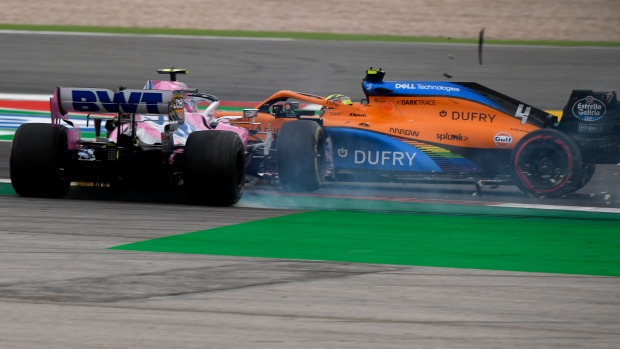 McLaren Formula 1 driver Lando Norris took to Twitter Tuesday to apology for “things I’ve said lately in media and interviews,” and called on himself to show more respect.

I owe an apology. I’ve been stupid and careless with some things I’ve said lately in media and interviews, and haven’t shown the respect I should have to certain people. I’m not that kind of person, so know I should apologise to them but also everyone reading/listening. Sorry

“I owe an apology. I’ve been stupid and careless with some things I’ve said lately in media and interviews, and haven’t shown the respect I should have to certain people. I’m not that kind of person, so know I should apologize to them but also everyone reading/listening. Sorry,” Norris tweeted Tuesday, though he did not name anyone or reference what specifically he was apologizing for in the message.

Norris finished 13th in Sunday’s race – more than a lap behind Hamilton as the Mercedes driver broke Michael Schumacher’s all-time wins record – and didn’t seem to be in the happiest of moods afterward.

When asked about Hamilton, Norris suggested Hamilton’s achievements don’t mean as much considering the strength of his car.

"I'm just happy for him, nothing more," Norris said.

"It doesn't mean anything to me, really. He's in a car which should win every race, basically. He has to beat one or two other drivers, that's it. Fair play to him, he's still doing the job he has to do."

Norris also criticized Stroll, who was handed a five-second time penalty by race stewards and was not able to finish after colliding with Norris at turn one. The Canadian spun out, ending his day, while Norris was forced to pit. The British driver unleashed a series of expletives on his headset following the collision.

“I don’t know what he was doing really,” said Norris. “He went to the left, which I was quite surprised by when he could have very easily could have gone to the inside. I was easily halfway alongside, and he just turns in. He obviously didn’t learn from Friday, but he doesn’t seem to learn from anything he does.”

Stroll was handed another five-second time penalty for exceeding track limits earlier in the race.

As for the reference to Friday, Norris could be talking about Stroll’s brush with Max Verstappen in the second practice which caused the Red Bull driver to also unleash a series of expletives on his radio. Stewards did not assess a penalty to either driver.

Following Sunday’s race in Portimao, the grid will be back in action this weekend with the Emilia Romagna Grand Prix in Imola, Italy.