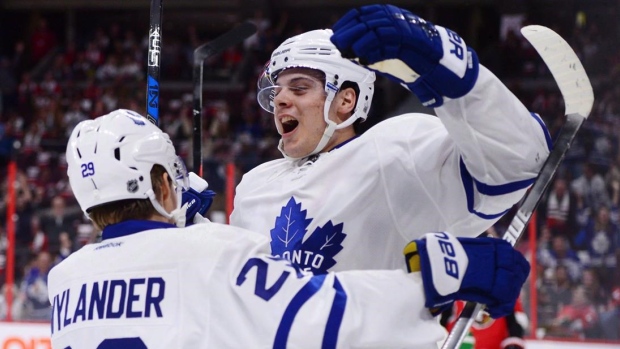 TORONTO — The kid was just 15, one year younger than he was, but Dylan Larkin knew there was something "special" about Auston Matthews.

Larkin got his first glimpse of the Toronto Maple Leafs' emerging star at an evaluation camp for USA hockey. He and the other 17-year-olds from the U.S. national development team program didn't know much about Matthews at that point, but his tremendous potential was easily apparent.

They were shocked when they learned he was from the hockey hinterland of Scottsdale, Ariz.

"We were looking and we see he's from Arizona and we're like 'Who the heck (is that)?'" Larkin, the Detroit Red Wings young centre, said Friday afternoon. "Arizona Bobcats is who I think he played for."

Matthews was "the best player there" at that camp in Ann Arbor, Mich., as Larkin remembers it, and the next season he'd earned a spot on a stacked U.S. under-18 squad which also featured NHL up-and-comers like Larkin, Buffalo's Jack Eichel, Columbus' Zach Werenski and Carolina's Noah Hanifin.

Even though he was the youngest player on that team Matthews was still known as one of its best, a big body who could move, control the puck and score goals. Matthews broke his leg early in that 2013-14 season, Larkin recalls, then returned after Christmas and was "unbelievable".

"It was impressive to see what he could do at that young age," said Larkin ahead of the NHL's Centennial Classic, an outdoor game that will feature the Red Wings and Maple Leafs. "I guess you don't really know (how good he'll be), but you have a good idea when he's that good at that young of an age."

By the summer of the summer of 2015, ahead of a season spent in Switzerland, Matthews was the widely projected top pick for the 2016 NHL draft. The Leafs selected him first overall late last June.

His rookie season has been blur of immense and even historic achievements, including the first ever four-goal game in an NHL debut. Matthews has matched Winnipeg's Patrik Laine for the rookie scoring lead with a special December, totalling 30 points in his first 35 NHL games. His 18 goals trail only Laine among first-year players. Matthews has scored 12 of those in the last 16 games.

His 15 even-strength goals, meanwhile, are second only to Sidney Crosby among all NHL players, and his nine goals to open scoring currently lead the league.

A first round pick in 2015, Larkin had a strong first season for the Wings last year. He posted 23 goals and 45 points as a 19-year-old, good for sixth in NHL rookie scoring. Those numbers look small in comparison to Matthews, currently on pace for 42 goals and 70 points.

Matthews could become the only teenage rookie (Laine could also join him) in the salary cap era to hit the 40-goal plateau. He also appears likely to break the Leafs all-time records for goals (Wendel Clark had 34 in 1985-86) and points in a season by a first-year player (Peter Ihnacak had 66 in 1982-83).

"I think I had a good year, (but) it's completely different what he's doing," said Larkin. "He's taking the league by storm. He's becoming a superstar or he is a superstar (already)."

Larkin just hopes his former teammate has an off-game on Sunday. Though Detroit won in overtime against Ottawa on Thursday night, the Wings are a scuffling outfit at the moment, in danger of missing the playoffs for the first time since 1990.

The Leafs, on the other hand, have won four straight, led by their talented rookie centre.

"He's always been special," Larkin said of Matthews. "I hope we have an answer for him on Sunday."