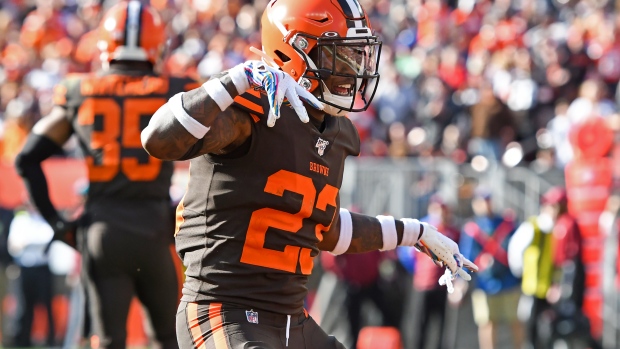 ALAMEDA, Calif. — The Las Vegas Raiders signed defensive back Damarious Randall to a one-year contract in their latest move to try to upgrade a porous defence.

The Raiders announced the signing Tuesday after agreeing to the deal pending a physical last week. The Raiders signed Randall to a $3.25 million contract after another deal with cornerback Eli Apple fell through.

A person familiar with the process says Apple didn’t pass a physical after agreeing to a one-year contract earlier in free agency. The person spoke on condition of anonymity because the team never announced the move.

The 27-year-old Randall was a first-round pick by Green Bay in 2015 with experience playing outside cornerback, in the slot and at both safety positions.

He had 10 interceptions in three seasons for the Packers at cornerback but struggled at times in that role and was traded to Cleveland in 2018 for quarterback DeShone Kizer and pick swaps in the fourth and fifth rounds.

Randall had his best season as a free safety in 2018 when he had four interceptions and nine passes defenced in 15 games.

He played both safety roles and in the slot last season and fell out of favour in Cleveland.

Randall allowed eight TDs in coverage last season, according to SportRadar, and 27 in his five-year career. Both of those marks are second-worst in the NFL.

The Raiders have now announced all 16 contracts reached since the start of the league year last month. The class is headlined on the defensive side of the ball, where Randall will team with linebackers Cory Littleton and Nick Kwiatkoski and safety Jeff Heath to upgrade a defence that has allowed the third-most pass plays of at least 20 yards over the past three seasons.

The Raiders also tried to bolster the line by signing defensive tackles Maliek Collins and Daniel Ross, along with edge rusher Carl Nassib.

The Raiders still have needs for a No. 1 receiver and at cornerback that could be addressed with two first-round picks in the draft later this month.