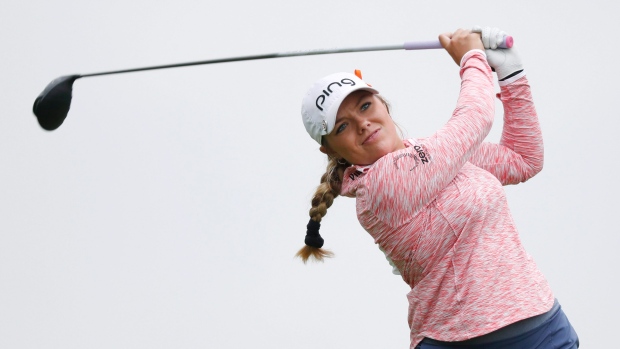 GALLOWAY, N.J. — Lauren Stephenson holed out from the rough from 137 yards for eagle on the par-4 14th and shot an 8-under 63 on Thursday for a share of the Shoprite LPGA Classic lead with Mi Hyang Lee.

Stephenson, the 23-year-old former Clemson and Alabama player in her second season on the LPGA Tour, birdied four of the first five holes and finished the morning round on Seaview’s Bay Course with eight birdies and two bogeys.

“It was a beautiful day out," Stephenson said. "The weather was amazing and the golf was really good on top of that. I got some good lucky shots out there, but I also played some good golf. It was really nice to see kind of hard work paying off.”

She used a pitching wedge for the eagle.

Lee, the 27-year-old South Korean player who won the last of her two LPGA Tour titles in 2017, birdied the final two holes in a bogey-free afternoon round.

Ryann O’Toole and Nasa Hataoka were a stroke back.

“I just feel like today was a smooth round.” O’Toole said. “I hit a lot of fairways, a lot of greens. I told myself beginning of this week to stay patient.”

Nelly Korda and Brooke Henderson, paired together three weeks after Mirim Lee beat them in a playoff in the major ANA Inspiration, each shot 68. Mirim Lee opened with a 73.

“I played really solid on the back nine,” Korda said. “I got to get my wedges a little dialed in, but definitely a good day.”

The tournament is being contested at 72 holes for only the second time since it began in 1986. The additional round replaced the pro-am that was cancelled because there are no spectators. The major KPMG Women’s PGA Championship is next week at Aronimink outside Philadelphia.