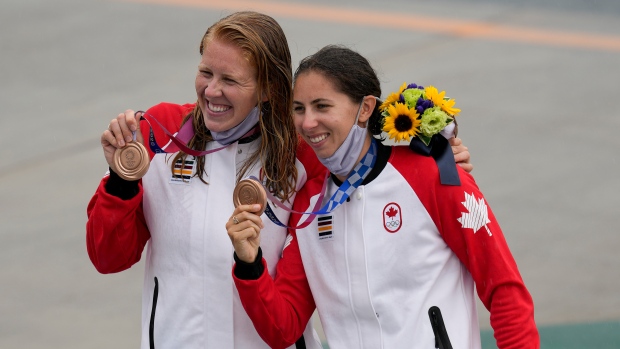 TOKYO — With a late push to take bronze in the women's C-2 500 metres, Katie Vincent and Laurence Vincent-Lapointe made two kinds of history.

Theirs was the 23rd medal for Canada at the Tokyo Olympics, the country's highest tally at a non-boycotted Summer Games.

It also put them on the podium for the event's Olympic debut, as canoe had until this year been an exclusively male discipline.

Vincent-Lapointe, who dominated the sport for much of the past decade and fought hard to see it included in the Games, said it was what she'd been waiting for her whole career.

"These Games — I waited long, long, long for them, and I've given everything I have. And I'm super proud that I was able to finish this on such a great note with Katie," she said.

"I — it was worth everything."

For Vincent-Lapointe, who took silver in the C-1 200 on Thursday, the Games have been a comeback of sorts.

In addition to waiting for her sport to be included, the 29-year-old paddler from Trois-Rivières, Que., had to fight to clear her name following an "adverse analytical finding" during an out-of-competition drug test two years ago.

The International Canoe Federation cleared her to compete in January 2020, accepting that Vincent-Lapointe was the victim of third-party contamination of a banned substance.

Her partner in the C-2 said she was proud of both of them for making it through the uncertainty.

"It's so nice to see that journey end that way. I think the last few years have been really crazy. And yeah, there's been a lot of turbulence," said Vincent, 25, of Mississauga, Ont.

"To finish off the story like that with a bronze medal today, I'm just so happy and proud of Laurence myself for persevering through all of that and still being able to perform here in Tokyo."

The canoeists weren't the only Canadians showing perseverance on Saturday.

Appearing in her second Olympics — but her first in 17 years — Malindi Elmore withstood intense heat and humidity to finish ninth in the women's marathon.

She went on to become one of Canada's premier Ironman triathletes, and ran her first marathon just two years ago.

The 41-year-old from Kelowna, B.C., demonstrated that iron will on Saturday, picking off eight runners over the second half of the race to finish in two hours 30 minutes 59 seconds.

"Patience is power," said Elmore. "The longer I could be patient, the better I would do."

The marathons and race walk events were held in Sapporo, roughly 800 kilometres north of Tokyo, in hopes of more favourable weather, but the smothering heat and humidity were still a huge factor.

The temperature was 27 C with 75 per cent humidity when the runners pushed off the start line at 6 a.m., and had climbed to 30 C by the finish.

Weather was also a major factor on the golf course, where competitors teed off as early as 6:30 a.m. local time in an effort to avoid approaching thunderstorms.

Rain started to fall just as Canadians Brooke Henderson and Alena Sharp finished their rounds, and play was suspended briefly.

Henderson shot a 4-under 67 in the final round — her best score at the Summer Games — and finished in a tie for 29th.

Although it was a disappointing result for the eighth-ranked women's player in the world, Henderson said she learned a lot about mental toughness over her four rounds at Kasumigaseki Country Club.

"It would have been easy for me to, once I was out of medal contention, just to give up. But we said, 'Let's just fight for every shot and try to make a climb here,'" said Henderson, the 23-year-old from Smiths Falls, Ont.

Sharp, who struggled to a 4-over 75 in the final round to finish in 49th place, said she felt "worn out" from a hectic playing and travel schedule.

She and her wife/caddy Sarah Bowman planned to take five weeks off to recover following the closing ceremony.

At the Tokyo Aquatics Centre, 18-year-old Nathan Zsombor-Murray failed to advance to the final of the men's 10-metre platform final.

The diver from Pointe-Claire, Que., finished in 13th place in the semifinal, 2.55 points away from the final qualifying spot.

"I'm certainly disappointed, but I think I'm even more motivated for Paris and the next three years," he said.

“Finishing 13th in the world at 18, I certainly have a few years ahead of me to get stronger physically and mentally.”