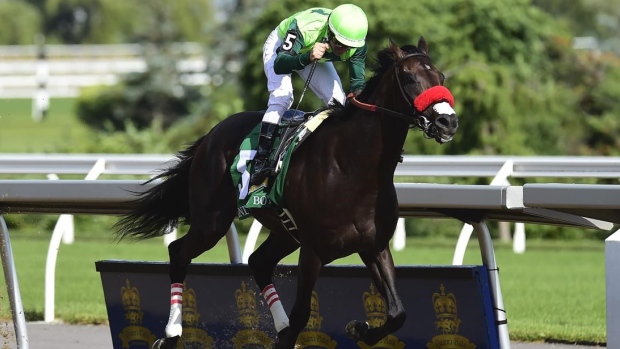 Because of the ongoing COVID-19 pandemic, races at both venues would be held without spectators, likely through to September, Lawson said.

Lawson added should those dates not be possible, harness racing could restart June 12 with the thoroughbreds getting underway June 13.

"We're planning for those (early) June dates," Lawson said during an on-line question-and-answer session. "Let's hope we can proceed with the big caveat that we need to get approval from government and health authorities.

"People need to get back to live racing, they need to earn a living. I think everyone understands we're an industry that's been very hard hit and the sooner we can get racing the better, all subject to proper health guidelines."

Lawson's announcement came on the same day the Ontario government extended its declaration of emergency in response to the pandemic until June 2. The order, which has been in place since March 17, was to expire Tuesday.

"Clearly it's something we have to be mindful and respectful of," Lawson said. "At the same time I think the provincial government has shown they are easing restrictions and allowing businesses to proceed during the month of May so it's not definitive that the floodgates open at the beginning of June.

"We're certainly working with government to have them understand we're a business that can safely proceed with physical distancing guidelines and respecting the protocols health authorities will put in place. We're comfortable that we're moving in that direction."

Lisa MacLeod, Ontario's Minister of Tourism, Culture and Sport, said she spoke with Lawson on Monday.

Harness racing at Woodbine Mohawk Park was suspended in March due to the pandemic. It also forced the postponement of the April 18 start to Woodbine Racetrack's thoroughbred card.

That included the $1-million Queen's Plate, North America's longest continuously run stakes race which had been slated for June 27. With the thoroughbred season's projected start, Lawson would expect the Queen's Plate — the first jewel of Canada's Triple Crown — to be run sometime in September, to not only enhance the chances of spectators being allowed to attend but give horses sufficient preparation time for the 1 1/4-mile race.

"That will let us have a lead-up in terms of the regular lead-ups that there are," Lawson said. "We'll want to keep the Plate Trial and Woodbine Oaks (run on the same day in August) and have them lead into a (Queen's Plate) race in September.

"I don't think we're co-ordinated with Fort Erie yet in terms of the Prince of Wales (Canada's second Triple Crown race). We're working through that and our stakes schedule will be solid in the fall."

Thoroughbred training is slated to begin May 22 at Woodbine and May 27 at Mohawk Park. Lawson said turf training at Woodbine won't resume before June.

Thoroughbred racing will be offered on June 5-6 (or June 12-13 if required). It will move to three days the following week (Friday-Saturday-Sunday) before going to four (Thursday through Sunday) on the second week.

Lawson said the four-night schedule is expected to run throughout the summer. Harness racing will run its traditional five-day rotation (Friday through Tuesday).

While thoroughbred racing has yet to begin at Woodbine, it's been going south of the border at such tracks as Florida’s Gulfstream Park and Tampa Bay Downs and Arkansas’ Oaklawn Park.

"The biggest difference has just been the declaration of emergency in Ontario and you have to be respectful of essential businesses," Lawson said. "We're under tight guidelines and restrictions not to be opening businesses and I think everyone is understanding of that and has been patient."

Woodbine has kept its backstretch open throughout the pandemic, limiting access to essential personnel to care for and exercise horses while adhering to strict measures. Starting on Wednesday, jockeys will be allowed to breeze horses while following established protocol.

Woodbine is also reconfiguring the jockey's room while bringing in trailers for Mohawk Park drivers. Jockeys will have to wear masks from the time they enter the paddock until they reach the starting gates.

So far there've been no positive tests at either facility.

"It's a concern," Lawson said. "It will have to be managed with common sense.

"We do have a COVID committee with a medical consultant that's helping steer our way through that and right now the steering is making sure we have safety procedures in place to mitigate the risk of that happening. We're going to do everything we can to make sure there's physical distancing for these drivers and jockeys and strict protocols."

So what happens if there's a positive test?

"Certainly it would mean self isolation for 14 days and doing testing of people who may've been exposed," Lawson said. "It's going to take careful management.

"The good news is . . . there hasn't been a spread of the virus amongst the jockey colony in any racetrack across the world that I'm aware. I think we'll have a different environment in our paddocks, both at Mohawk and at Woodbine, when racing starts. First and foremost in our mind will be doing everything we can to (lessen) that risk."

This report by The Canadian Press was first published May 12, 2020.